The recent rapid surge of eSports into western popular culture has taken many major brands by surprise. Not only has the size of the audience grown, but the number of brands trying desperately to navigate their way into the unfamiliar gaming culture has as well. While eSports have enjoyed incredible success for over a decade in countries like Korea, the eSports sonic boom has only just recently started to hit us here, in the USA.

A Business Insider article has found that advertising and corporate sponsorships in eSports are around $900 million. Brand owners and advertisers are adapting to this emergent form of entertainment, and we expect to see further growth in sponsorship deals across the segment.

So, how can your brand take a bite of the eSports pie? First impressions are everything in the hearts and minds of spend-happy eSports competitors and fans. Make sure you get off on the right foot with your community and stay there. It’s very important to be strategic with your campaigns, ensuring they deliver added value to the fan and player experience as well as to the game itself. Even then, seeking out the right opportunities to connect with the eSports fans in the most authentic way possible can be a challenge. We've compiled a list of some of the most common initiatives that brands take to communicate the value of their product to eSports enthusiasts.

According to Mill, 78.8% of marketers confirmed that video marketing, YouTube in particular, is their most effective marketing channel. An effective way of getting the eyes of the eSports community exposed to your brand is to create compelling videos around the eSports they're interested in, where your brand takes a back seat to the content itself. eSports fans appreciate the brands who bring them valuable content that is relevant to their interests, so simply having "powered by [YourBrand]", or "brought to you by [MyCompany]" can be a powerful tactic for getting your brand recognized without coming across as pushy sales guys. These content marketing opportunities where we can blur the lines between education, entertainment, and advertising are invaluable for building brand recognition within the eSports space.

“People don’t like being sold to. It’s an off-putting experience to have sales pitches thrown in your face when you’re trying to consume content. The challenge for content marketers is to make sure the entertainment value of their content is engaging and valuable, reducing the friction between the branding message and the audience.” – Pete Sena, Digital Surgeons

It’s important to speak the language of the community and keep your audience engaged. What better way than to let the Michael Jordans of gaming do some of that talking and relationship building for you? Each of these influencers have tremendous amounts of loyal followers, who see them as a source of valuable information pertaining to their favorite eSport. By leveraging the rapport between content creators and content consumers, branding messages become significantly more effective.

eSports Teams usually come in two varieties. There are "eSports Works Teams", and what we call "eSports Agency Teams." eSports Works Teams are teams which are financed and run by product companies, such as the Samsung Galaxy Pro-Game Team — the current League of Legends world champions. You may have seen this model a lot already if you're a fan of football (soccer), rugby or motorsports, where companies such as Volkswagen, IBM, Samsung, Toyota, and Airbus have all had Works Teams at one point or another.

As a result of these eSports Works Teams being operated by larger product-focused businesses, sponsoring one can carry more of a challenge for brands looking to enter esports. That being said, many do work with product sponsors, such as Nike, who seed their product to the team's players. If you're looking for more brand building potential than that, it probably makes more sense for your marketing dollars to start and operate your own eSports Works Team.

The second variety is by far the most common model that eSports teams have adopted, Agency Teams. Agency Teams are far more attractive to brands looking build awareness through eSports and function as mini esports marketing agencies; using their team to market brands and treating sponsors like clients. Brands who sponsor Agency Teams usually get logo presence on the team jersey (broadcast visibility), team website presence, presence on team social media, and extra visibility through publications when the team performs well. These agency-style teams typically offer additional services such as branded content creation and offer their players influencer status for reviews and testimonials for their sponsor's products and offerings.

The drawback to this kind of sponsorship is that many of these agency teams are largely not comprised of marketers. Meaning that while brands who sponsor these types of teams do get the great benefits that the visibility the team sponsorship nets them, the traditional marketing they offer around that can be narrow and unimaginative. This drawback is easily mitigated by brands hiring an experienced full service marketing agency to leverage their creativity involving eSports interests into a greater, more comprehensive overall campaign.

A really creative way to subsidize the cost of putting on, or sponsoring a large eSports event is through crowdfunding. Last year, DOTA 2's creator Valve, sold in-game items and packages and a portion of the proceeds went directly toward the prize pool at their marquee event, The International. The result was a prize pool of over $20M and one of the largest eSports events to date. How could you leverage crowdfunding for your brand's initiatives within eSports?

White label events are typically smaller, invitation-only tournaments and events put on by agencies, whose structure and format has been established. The missing piece is the client looking to gain exposure and build their brand through eSports. These events are almost always successful for client brands, so long as the agency deploying the initiative is competent in tailoring the brand message to the gaming consumer. Red Bull is notoriously adept at putting on white label eSports events.

6. Installations and harnessing the power of experiential

Much like conferences, marketing installations that cater to the interests of eSports enthusiasts could be a very successful method of marketing your brand or product inside of the realm of eSports. MadCatz and Xtension Arcade Cabinet did it at EVO in 2013. While Coca-Cola took this concept to new heights at the 2014 League of Legends World Championship Finale in Seoul, Korea.

“The worlds of physical and digital are completely fused now. These Gamers and eSports enthusiasts are at the epicenter of this new physical/virtual playground blurring of altered realities. Crafting multi-sensory branded experiences for your core audience puts the “EMOTION” in esports and stimulates the mind thousands of times faster than a standard rational thought.” – Peter Sena, Digital Surgeons 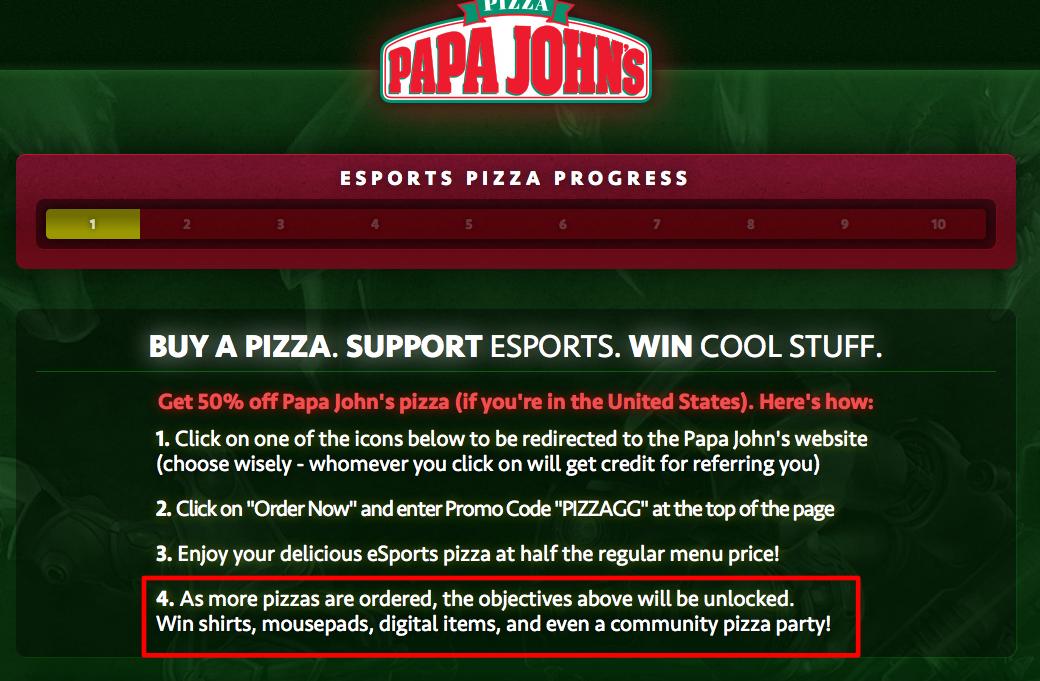 Surprisingly, digital landing pages are still relatively rare in eSports campaigns, even though landing pages can be the most important aspect of a digital campaign. If you are considering using eSports to market your brand, building out a landing page for your campaign would be a smart move. Remember, landing pages are designed to drive conversions. Keep your eSports oriented landing pages on target and to the point, you won't regret it.

Traditional eSports marketing strategies are all effective in their own ways, but to truly stand out and have your brand bubble up to the forefront of everyone's minds, the best way to market your brand will always be to think outside the box. Old Spice has been on a tear recently carried by their willingness to do just that.

From April 16th - 18th, 2015, Old Spice took over gaming's largest live streaming platform, Twitch.tv, with a completely outside-the-box strategy. Taking the wildly successful model proven by the Twitch Plays Pokemon sensation, Old Spice created a "live-action interactive video game" controlled by the viewers inside the Twitch chat called "Old Spice Nature Adventure." In this game, "Nature Man" was controlled by the viewers on Twitch and did their bidding for 10 hours a day for 3 days. The entire broadcast was full of humor as a result of its color commentator, who would also intermittently plug Old Spice and remind viewers that Old Spice was the key to not smelling like cheese. The result was an incredibly creative campaign that also appears to have been pretty successful.

Another example of innovative thinking is the partnership between Coke Zero and Cinemark with their nationwide viewing parties for the League of Legends Mid-Season Invitational, which happened in theaters across the USA on May 10th, 2015.

A great example of authenticity comes from this great campaign by T-Mobile from last year’s DOTA 2 International, capped off by eSports fan and CEO John Legere’s genuine and enthusiastic support for the event. Just reading the response thread on Twitter shows that eSports fans loved it.

Competitive gaming as a place to focus your marketing is totally sound and backed by consumer behavior data. Sure, competitive gaming is mostly a marketing strategy, and not yet a big revenue driver but it is at the cusp of experience, which always ends up being a core driver for brands and products. It’s important for you to arrive early and set this expectation if your brand is thinking about entering the segment.

In our work with companies including Irrational Games/2k, Epic Games, and Tilting Point we are seeing the many tangible benefits to using unique forms of engagement and advertising to reduce customer acquisition costs and help drive up brand and game affinity.

Although it’s definitely possible that it could drive solid revenue for your business given a proper marketing mix, eSports marketing is more about brand/consumer relationship building and generating engagement by providing value to the community than direct revenue generation. It does this very very well for the early movers who have invested into space. The key is keeping your message and efforts authentic so that your brand is established as a valuable community member. If you do that, you’re sure to be rewarded with engagement, brand awareness, and loyalty.

Get more insights right to your inbox.