It’s no secret that brands have their hands full when connecting with millennials in today’s hyper-connected and brand-promiscuous social consumer landscape. It’s also not much of a secret that competitive video gaming, most commonly known as eSports, has emerged as a global phenomenon and is all-the-rage with this elusive demographic.

The explosion of video gameplay as entertainment has created an undeniably rich media channel which forward-thinking companies like Red Bull are leveraging with great success. With so few able to capitalize on the eSports opportunity thus far, brands would be wise to take some cues from those who have.

Red Bull recognized the potential of eSports early and has executed more effectively than almost any other brand involved in the space. They are one of the few brands who have been able to foster an authentic connection with millennials through eSports, by showing that real engagement takes more than merely being present. In doing so, they have established their brand as one of the leaders driving eSports toward even greater heights of legitimacy, professionalism, and spectacle; all while creating a lasting and powerful connection with the valuable millennial demographic.

Connecting to the hyper-connected

Red Bull's sense of profiling and connecting with niche communities, and their knack for connecting their product with the millennial demographic didn’t start with Felix Baumgartner’s breathtaking 24-plus-mile freefall from the edge of space. They are a brand who understands content and “epic moments” storytelling. Red Bull has recognized that by putting their product, which has a true functional benefit into a space where emotion and authenticity are paramount that they can extract results. It’s a simple strategy which has allowed Red Bull to make a name for itself supporting athletes who exist on the fringe of pop culture, and proof-positive that they excel at authentic consumer engagement.

For Red Bull, eSports has been no exception. The energy drink maker has been sponsoring and working with professional video game players since 2006. They clearly understand the media consumption patterns of today’s consumer and execute accordingly knowing that it’s about context-rich experiences first and content second. Most importantly they recognize that it is a marathon, not a sprint getting into the consideration set of their consumers.

While the eSports tidal wave is smashing viewership records, the number of households with cable has fallen. Estimates show a drop in the number of households with cable of over 10% in the past five years. With television and other traditional media consumption at all time lows, gaming has been steadily gnawing at the foothold these channels once had with consumers. There isn’t just more people playing games, there is also tons of people consuming the digital content surrounding it using platforms like YouTube and Twitch. Brands taking a traditional approach to marketing to millennials face additional complexities, drawn from the fact that mobile devices have put a limitless number of distractions into the pockets of nearly everyone in the modern world. Brand messages are muffled amongst the noise of the newsfeed, push notifications, livestreams, and subreddits that consumers engage with daily. Meanwhile, gaming viewership has grown to reach over 188 million viewers. This is almost double the viewership from all of 2014. It is no wonder that brands like Red Bull have invested over $578 million into the space this year alone.

Red Bull and fellow carbonated beverage maker Coca-Cola have demonstrated that a mix of new and old media, informed by a deep understanding of how each fits into the lives of the millennial audience, can successfully push brand objectives in the space. Red Bull’s venture into eSports is wide-reaching with investments into events, teams, broadcast production, training facilities, content creation, and more.

So, why are these brands becoming increasingly interested in making big-time investments into gaming? Well, it’s that we’re witnessing tremendous growth in the space. In 2018, the total value of the worldwide eSports market is predicted to reach $905 million. Competitive gaming isn’t showing signs of slowing down either, it has been estimated that eSports could generate more than $1.8 billion by 2020. Competitive gaming is on the cusp of becoming a no-brainer for marketers.

Gaming exists at the crossroads between all of the media types the spend-happy millennial consumers engage with the most. Red Bull saw the future, and has been making waves with a passionate community of consumers cheering them on for nearly a decade in the “blue ocean” market space of eSports.

Brands not already involved with the video game industry would be wise to follow in Red Bull’s competitive gaming footsteps. Through eSports, Red Bull has gained access to a considerable audience of passionate, engaged fans and gamers, in a cost-effective method unmatched by traditional channels.

In June 2006, Red Bull announced their very first eSports athlete sponsorship when they signed Halo legend David “Walshy” Walsh, marking one of their first forays into the world of eSports. A few years later in 2011, Red Bull took their commitment to the next level: organizing their own Red Bull LAN events. The LAN was the perfect test bed for Red Bull events and was a big success, delivering high production and competitive value which helped them grow their brand equity in the community. Red Bull LAN established the framework upon which the energy drink maker built an authentic connection within gaming. Allowing them to reach more eSports fans in order to generate a bigger interest in their brand. 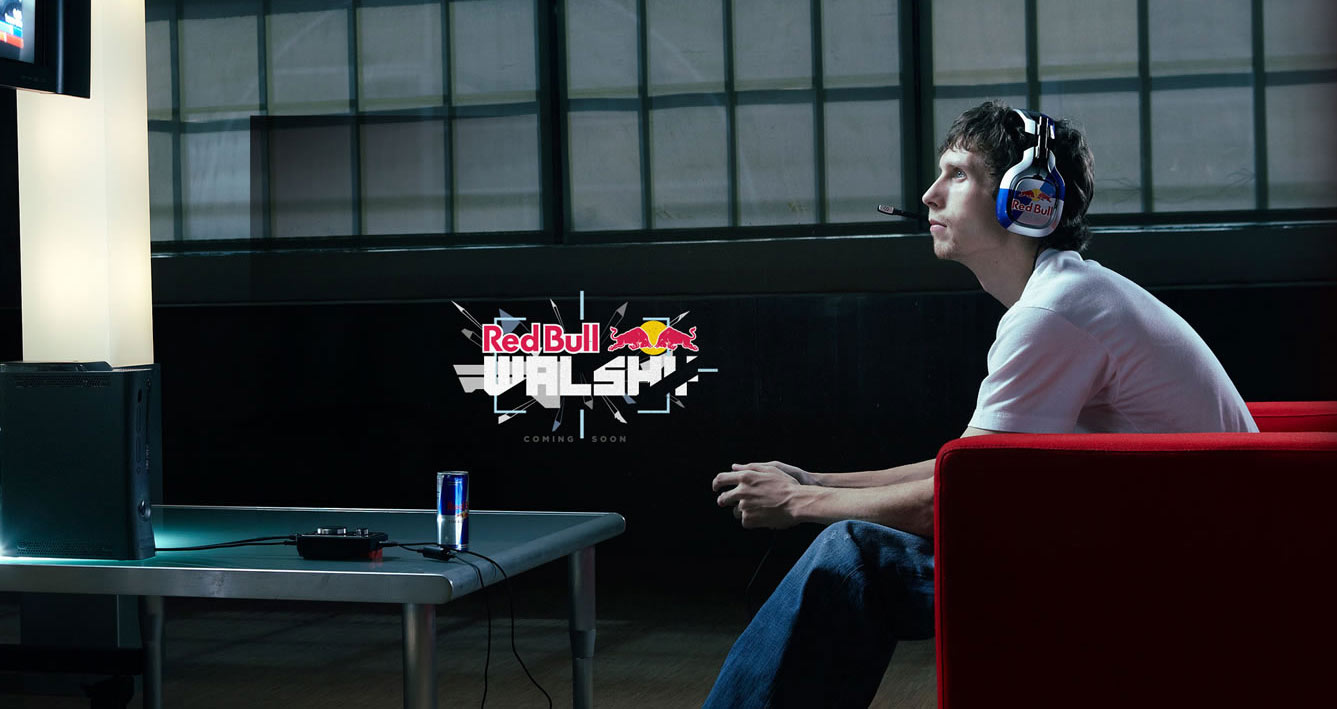 Encouraged by the success of Red Bull LAN, Red Bull doubled down on their investment, creating a new series of invitation-only events. Red Bull Battle Grounds centered around the biggest eSports game in the world at the time, StarCraft II. Battle Grounds has become one of the most popular eSports events and has given Red Bull brand recognition throughout the entire international eSports community.

Red Bull has become an eSports empire that also happens to sell a beverage, which is a powerful thing. Having come to the realization that marketing to millennials is no longer an ad on a billboard or a spread in a magazine. Cable television, and the commercials it’s lived on for generations, are in decline. Reaching your audience today needs to include a creative multi-channel approach blending great content and authenticity, with community building.

Red Bull is providing great events and great entertainment which is valuable to those inside and outside of the eSports community. In return, they gain value from people who consume that content who then associate the Red Bull brand with the things they love and are fascinated by. Red Bull has been consistent in aligning its brand with sports or activities that exist on the fringe of our cultural awareness, with individuals leading lifestyles most of us aren’t brave enough to live. They arm themselves with the power of our curiosity and passion, while creating amazing events and content around their brand, but never directly about their product, in a way that is so engaging that consumers will spend hours interacting with it.

Red Bull’s investment into eSports extends what they’ve done in extreme sports for the past decade: engaging their target audiences through great content, live events, and social media. By staying connected to the community with their fingers constantly on the pulse of competitive gaming, Red Bull has unlocked a world of possibilities for continued engagement from eSports fans. Staying in-touch with the ebb and flow of eSports has allowed them to pivot as needed to maintain their foothold at the forefront of the gaming hivemind.

A great example of their ability to pivot occurred recently when StarCraft II’s popularity started to wane, Red Bull branched out and created a new DOTA2 event under their highly recognizable Battle Grounds brand. As a result, Red Bull was able to remain a conduit for fans to consume new forms of eSports-related entertainment while leveraging the existing Battle Grounds brand to reach an entirely new fanbase.

Red Bull’s position in eSports was fortified by their continued support and drive to remain thought leaders in the space. In recent years, they have been one of the driving forces behind pushing for a more structured environment in eSports, supported by investments in sports-like training for their Red Bull eSports athletes. The Red Bull High Performance eSports lab, which is in development in Santa Monica, is a high-tech training facility offering access to nutritionists, scientists, and new technology designed to help measure, analyze, and train gamers and ultimately enhance their performance much like traditional sports.

Red Bull’s investment in eSports reveals their factors for success that brands looking to win in eSports would be wise to adopt.

I skate to where the puck is going to be, not where it has been.

eSports is aggressively growing right now, and it is predicted to reach market potential and viewership numbers that rival traditional sports and entertainment over the next few years. It is truly a burgeoning marketplace, and the rules of engagement are certainly still being written. For brands looking to take a page out of Red Bull’s book, and unlock the true marketing potential and strength of eSports — the time to establish yourself as the next big eSports brand is now.