Using Voice to Improve the Lives of Those Living with Paralysis

To many, voice-activated devices may seem like a novelty gimmick brought on by the next generation of connected technology. But the reality is, it’s beginning to unlock new possibilities for how we engage with the world around us. For many individuals suffering from paralysis, all they have is their voice. As an organization working to find treatments and better care for those afflicted with the disability, our partner, the Christopher & Dana Reeve Foundation, was presented with an opportunity to give the gift of voice. Through a collaboration with the team at Google, we helped them launch a campaign on national ADA awareness day to give away 100,000 Google Home Minis to those living with paralysis and showed the world how voice-activated tech could help improve everyday life and give these individuals more independence at home.

The most impactful campaigns are the ones that deliver the right message to their audience in the right way. In the context of our partnership with the Reeve Foundation and the team at Google, this meant designing a digital giveaway that could not only communicate the mission of the Reeve Foundation and the value of the Google Home Mini at the same time, but do it in a way that put accessibility at the core of the experience — from awareness through product redemption.

Together with the teams at Google and the Reeve Foundation, we were able to design, develop, and launch a potent digital campaign experience accessible by all audiences with paralysis. The campaign was a success, delivering tens of thousands of Home Minis within the first 7 days of the campaign being live, with some powerful stories to share as the result of our work.

Constructing a giveaway that was both emotionally compelling and technologically sound.

Simply put, we were brought in as a swat team of digital experts that function as both thought partners and capable producers in the partnership between the Reeve Foundation and Google. This meant transforming a powerful idea into a reality over the course of a four-week design sprint. To achieve this, we spearheaded an emotionally charged, highly accessible giveaway that could directly speak to needs of our core audience and drive a high amount of awareness for the campaign across google.com, Reeve’s owned media properties, and a variety of other earned media outlets.

Accessibility as a primary design objective.

Given the needs of our core audience, one of the most important challenges we had to solve for was making sure that we were truly designing with accessibility in mind. This meant that all individuals, disabled or not, could easily use the site and successfully fill out the form to obtain their Google Home Mini.

We believe that accessibility starts with keeping things simple. Everything must be legible and visibly clear on the page. The layout needed to be kept intuitive and basic — no overlapping elements or complicated interactions. There were some technical considerations as well, like knowing that the dropdown needed to change to radio buttons while on desktop, since radio buttons are much more accessible for those using a joystick. Another was with the content itself, as we had to be thorough with elements like alt text, knowing that some of our audience may be using screen readers to access the page.

When all was said and done, we had to build the page in a way that allowed anyone to navigate it regardless of their impairment. More recent techniques such as the use of area labels, which we used on the submission form, helped make it clear what content belonged in each field. Since filling out the form was our primary conversion goal for the page, we had to make sure every user could do it with ease. 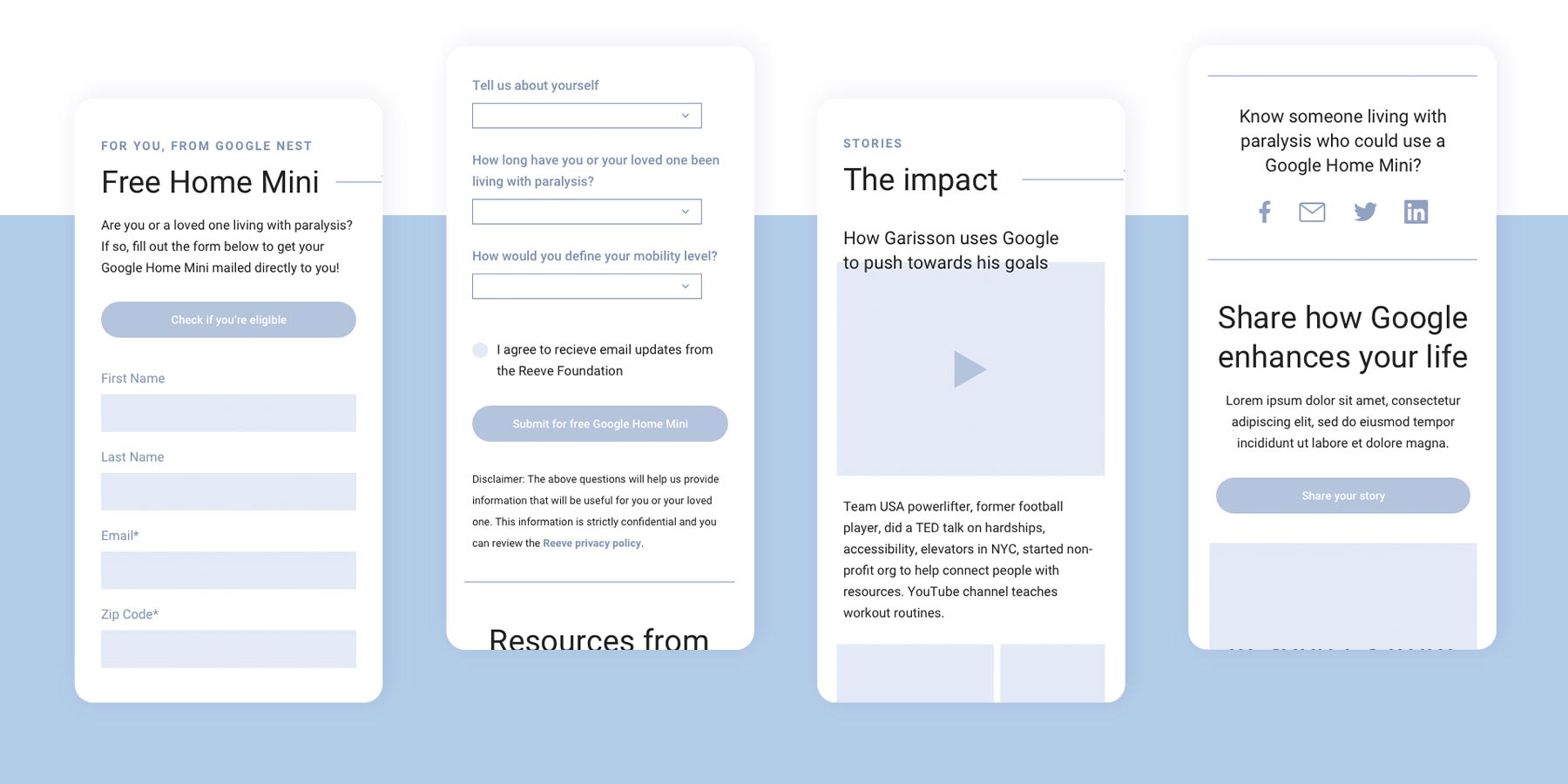 Keeping the experience on brand for both brands.

After designing a user experience that ensured accessibility, we then had to temper the experience’s art direction to be a beautifully executed visual balance of both the Reeve Foundation and Google. Since both Google and the Reeve Foundation are such prominent brands, we needed to make sure we paid enough homage to each so that the campaign could feel like the true collaboration it was.

Our strategy was to borrow elements from both brands that could cohesively work together to create a final deliverable that felt both Google and the Reeve Foundation. Many design decisions were made that helped the partnership feel equal. We decided to use some fonts from the Reeve Foundation on top of Google’s color palette and generous use of whitespace. The editorial feel of the page enabled us to retain the familiarity of the education that the Reeve Foundation provides to this cohort on a daily basis, too.

Give the community a voice through ambassadors.

One of the main objectives we needed to tackle from a narrative perspective was finding the right way to highlight our selected campaign Google-approved ambassadors to promote the partnership. These ambassadors living with paralysis (Garrison, Chanda and Cole) were already using Google devices to make their life easier, which gave us incredible content to help demonstrate the positive impact we were ultimately seeking to create for all audiences. For those living without a disability, these stories were a lesson in strength and awareness. For those living with paralysis, these stories were aspirational testimonials of how voice-enabled technology like the Google Home Mini could improve their lives.

To translate this into the digital experience, we designed a narrative structure focused on first drawing attention to the ambassadors’ stories, and then pairing that with a persistent way for users to submit their request to obtain the Google Home Mini.

One of the most understated, yet important challenges of the campaign was ensuring that the people applying for a Google Home Mini were truly affected by paralysis. Knowing full well that despite our best intentions the internet can still be a malicious place at times. As such, we had to do everything in our power as designers to keep people honest. But this problem for us was more than a design problem — we also had to code around people attempting to game the system. Our preventative measures included limiting the amount of times a person could submit a form, limiting suspicious email usage, and limiting the number of times a form was submitted from a given IP address. We also decided to set up a number of moral check-points throughout the experience itself.

At the click of each button leading to the form, users were prompted a modal with a list of requirements — two of which verify whoever was reading it is was either living with paralysis or a caregiver to someone who was. There, a user could either confirm their eligibility, bringing them to the form, or deny eligibility, bringing them back to their place on the page.

For extra security, we included questions in the form about the specific type of paralysis a person is living with, how long they have been paralyzed, and whether they are directly affected or a caregiver. We also added a required checkbox above the submission button that was meant to confirm a user’s eligibility one last time. 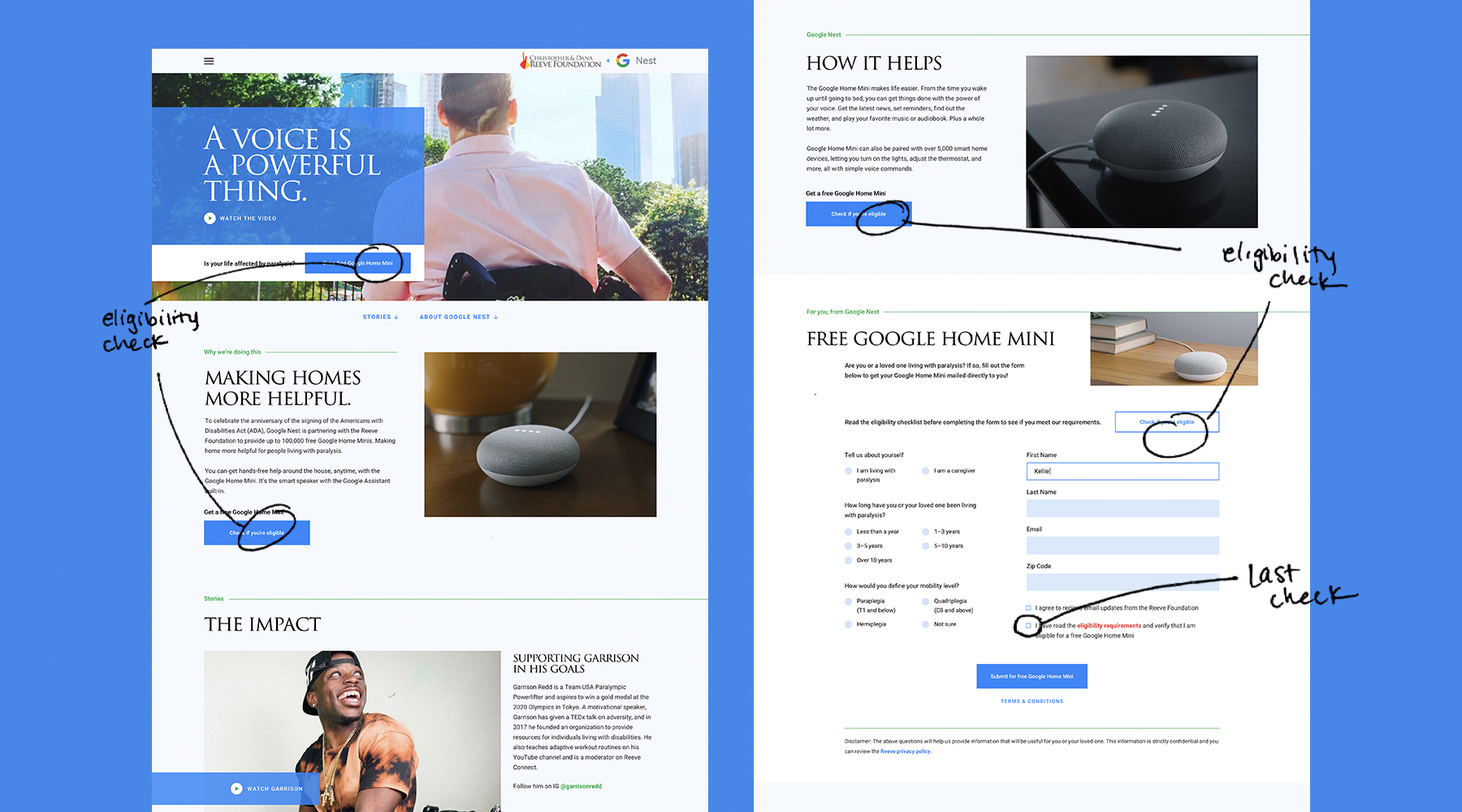 Using the power of voice as a megaphone.

Everyone’s voice is powerful no matter what, but when you have a physical disability, your voice is even more powerful and sometimes one of your greatest assets. This sentiment, coined as the “Power of Voice”, became a north star for our entire extended team throughout the engagement, carrying it over as a hashtag that we could promote through the campaign to encourage others to share their own experiences.

Keeping this concept close through the entire design and development phases of the campaign also allowed us to keep accessibility top of mind, as well as making sure this experience would truly feature the voice of the ambassadors. At the end of the day, we believe their voices are the ones that will change the way people see those living with disabilities, and give hope to others affected by paralysis.

A project fueled by passion.

We’ve always stood by our principle of only taking on work we believed in ourselves, but this one really hit home for us. Our Director of Engagement, Jaime Laufer, has a brother, Matt, who was left paralyzed after a car accident in 2003. We all know and love Matt, and our relationship to him really fueled our own passion for taking on this campaign. We also had the joy of having Matt himself working directly with us throughout the entire process — testing components and providing feedback for our work along the way.

We wholeheartedly believe that the reason why everyone from the Digital Surgeons, Reeve Foundation, and Google team were able to come together and gel as a single team was because of this passion. Despite working with stakeholders across various timezones with packed days, making the time to field calls and collaborate in real time was never an issue, precisely because everyone had the same goal in mind. We were, and still are, tied together by the belief that this campaign is the first step forward in many more to come of technology-driven solutions that can improve the lives of people everywhere.