The redesign of Long Trail Brewery’s website was influenced by my own love for quality craft beer, Long Trail’s unique history and their sustainable brewing practices. Their commitment to sustainability is made obvious through their unique brewing process, eco-friendly packaging, artesian well facility and the ways they contribute to the local community. They are not just another brewery, and have some really interesting history and appealing innovations that other breweries can’t compare to. If you get a chance to visit, I would highly recommend it. 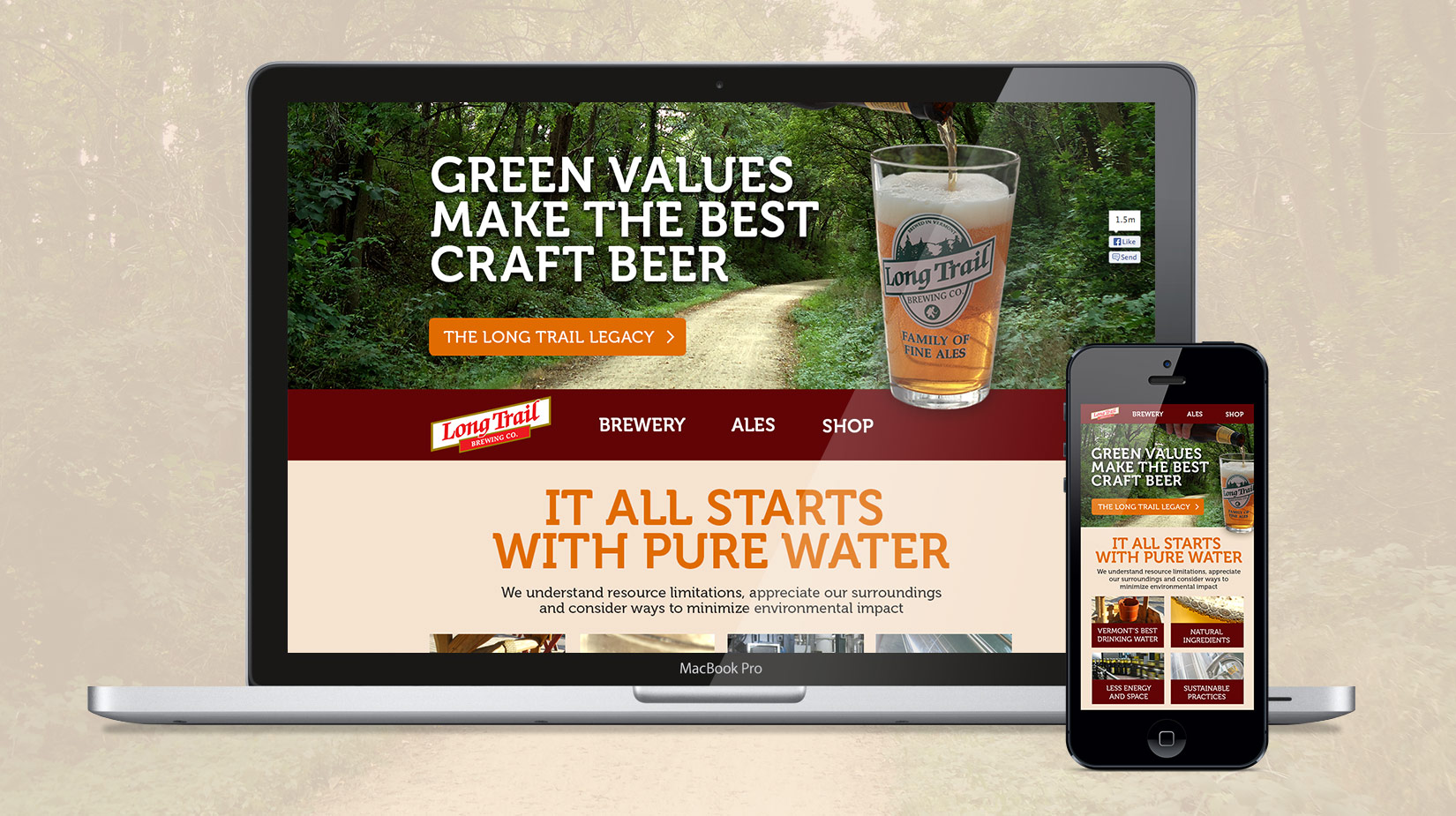 Many of the draft beers you can enjoy at the brewery are sold exclusively to Vermont distributors. Their brewery is also the only place to sample their own personal Brown Bag series brews, Farmhouse Ales and the Brush and Barrel Series, which I’ll touch on later. The brewery has a self-guided tour, which truly shows how passionate Long Trail is for sustainably utilizing all space possible in the brewhouse. The brewery is definitely an experience of industrial nature with the down-home comfort of Vermont. Having gone to their brewery, I felt that the Long Trail lifestyle was missing from their online presence. Their existing site does not show their key differentiators from other breweries. Using simple messaging tweaks to highlight their unique position in their industry paired with full width lifestyle imagery made for a site that would really bring Long Trail's online presence to life.

Long Trail’s existing site was not utilizing the benefits of their brewery the best way possible. They have a lot of unique history that is buried currently on their website. Long Trail volunteers with the Green Mountain Club who founded and maintain Long Trail, which is America’s oldest long-distance hiking trail that stretches through Vermont from Massachusetts to the Canadian border. This trail inspired Long Trail Brewery’s handcrafted ales and continues to inspire members and volunteers to support the club. For instance, Andy Pherson (founder) began his quest for brewing the best American-made alternative to imported German and English ales in 1989. With the first batch of Long Trail Ale ready for customers in November of that year, the ale has been Vermont’s best selling amber ale since 1990. In the beginning of Long Trail’s career, all beers were only sold in Vermont. Now, Long Trail distributes to thirteen other states in the Northeast. Long Trail does many things that distinguish them from other breweries. They take advantage of their historic green values, use pure fresh water and natural ingredients in all their beer, and contribute to the community through their ECO (Environmentally Conscious Operations) Brew and offer spent mash to local dairy farmers as an alternative to high costs of feed. The brewery produces over 8 tons of spent mash daily, which contains as much energy as corn silage which helps the struggling local dairy industry. The ECO Brew is part of Long Trail’s environmentally minded philosophy which is the foundation upon which Long Trail establishes their award winning craft beers. This philosophy and way of crafting beer has been significant for Long Trail over the last 20 years with reducing, reusing and recycling unusable materials with their local community. Within the Long Trail Legacy section on the reimagined site, one will get to learn all about their awards, the way they contribute to the local community, how they are sustainably crafting beer, and the process it follows.

Long Trail takes the words “environmentally conscious” very seriously, which involves a very innovative brewing process. They have sections for their process present on their existing site, but do not emphasize them enough. It’s wonderful that the brewery sits on the Ottauquechee River where fresh water is being used in their beer and recycled back to the environment with their artesian well system built into the brewhouse. They were awarded by the state to have “Vermont’s best drinking water,” use only natural ingredients, consume less energy and space, and perform the most sustainable practices. These are green values that Long Trail commits to on a daily basis. Not only is their use of water environmentally conscious, but their packaging process is as well. They use recycled fibers and glass in their product packaging, use soy and vegetable-based inks and recycled paper for promotional materials. The fact that users don’t have a quick and easy way to learn more about their brewery was a missed opportunity to really demonstrate how Long Trail is the most sustainable brewery in the area, which makes for the best craft beer. Choosing to exemplify this information in the redesign really made the information about their brewery successful. As you can see, key differentiators that make Long Trail truly unique are brought out in visual calls to action and show the lifestyle Long Trail has always strived for since their beginning.

Gettin’ Down to the Good Stuff​

Now that you have seen Long Trail behind the scenes, we can really get down to what really matters, their craft beer. Long Trail is a brewery that masters experiments with many styles that are a great American-made alternative to other beers from around the world. What was not seen on their existing site was their dedication to their creative, unique beers that are not found anywhere else but the brewery. Long Trail has a wide selection of different styles of beer. They have “an ale for every traveler” which really works as both a lifestyle element and a call to action to find your own brew that fits you as a drinker. This element would lead to a section on their site that would spell out all specifics about that brew that only beer drinkers would appreciate, as well as history regarding the style and how Long Trail “American-ized” it. And for the truly social drinker, Long Trail can utilize a unique hashtag, #MyLongTrail, which is used to publicly share your favorite beer from Long Trail. This will engage the community to share what they love about Long Trail, which was missing from their site as well.

Not many breweries present today experiment as much as Long Trail. You may find breweries that will create rare, annual brews that may be incredible. However, they’re only available once a year. Long Trail crafts incredible beer made by their own brewmasters every few months. Most, if not all the time, they are only available in Vermont. Long Trail has three main focuses for experimentation: Brush and Barrel Series, Farmhouse Ales and Brown Bag Series. The Brush and Barrel Series is their newest line of limited release ales, specially crafted in small batches. This is unique because they partner with local artists who get featured on the packaging and in return gives the artist a chance to get in on the brew action. Their Farmhouse Ales are relatively new, unfiltered and unscripted expressions, involving a new facility especially made for these farmhouse ales. The Brown Bag Series has been around since 1993 and served as a way to test and market new products fast and affordably. Since too much time was required to come up with new graphics, they were forced into a simple, generic branding which really showed the true messaging. Keeping that as a design element was essential because it’s part of their history. Since the brews change every 8 weeks, showing a slider of all the creations makes it easy for a user looking for a specific style, or someone who is interested in their latest and greatest. At the moment, Long Trail’s Black Rye IPA is batch #6 and was made back in September 2013.​

One thing I wished the existing site had more information about is their Brown Bag Club. There was not much detailed information about the club’s benefits other than filling out a form to join in on the exclusive offers Long Trail has. Having the Brown Bag Series beers only available in the brewery pub and select locations make for joining the brown bag club exclusive. There are possibilities of sharing opinions to the brewmasters and earning free swag. Involving the social drinker here as well, Long Trail can utilize more unique hashtags about each Brown Bag batch. For the Black Rye IPA, using the hashtag “#BrownBagBatch6” delegates with this specific brew. Each Brown Bag Series brew will have it’s own numbered hashtag which correlates to the creation. This will draw more of a social crowd into the Brown Bag Series, which will ultimately help in attracting beer drinkers from all over to become more involved in the Brown Bag Club.

Trying out Long Trail’s unique beers is a perfect match with their cozy blend of industrial style and down-home comfort of the brewery. The pub area is the biggest in the whole brewery compared to their brewhouse, which gives enough room to try out all their styles with ease. When you walk into the brewery pub, you are greeted with a big open space, which leads you right to their open windows onlooking the Ottauquechee River. You will find their huge keg which supplies all their brews directly from their brewhouse upstairs. The image above shows where you would enjoy Long Trail at the pub area. If you keep walking past this on your right, you will find stairs that lead up to the brewhouse. It is quite small which shows their sustainable commitment to brewing natural, quality beer. You look down at all the beer being made in big tanks, and watch the fresh beer get bottled and packaged on a quick assembly line (which was my favorite part). Another drawback to their existing site was the difficulty in finding their hours of operation. I had to read through paragraphs about the visitor center to find out where they are located and their hours. Choosing to show their hours right on the homepage with a call to action to “take a hike over” would be successful in grabbing the user’s attention to information regarding their brewery and the visitor center with ease.

Long Trail’s existing site has a great beer finder feature, and would be a shame to exclude it. They currently only distribute to select states in the Northeast, but their special brews are primarily sold to Vermont retailers. So, finding your favorite beer might prove to be too big an adventure without this Long Trail Locator. With the locator, there is an option to enter your zip code and find Long Trail right from the homepage. Once a zip code is entered, it will lead to a section within the Shop page. This is very important to beer drinkers from all over because they include restaurants, bars, and stores where you can buy the beer.

​Long Trail has a great, interesting history that was not being shown to its full potential on their existing site, and went overlooked in many areas. Choosing to push out their qualities of crafting beer really made Long Trail’s online presence come to life. They have a top position in the industry being Vermont’s number one selling beer. Showing Long Trail’s lifestyle in this redesign exemplified who they truly are in the craft beer industry, which is becoming more popular each day.​