Whether you’re posting as an individual or a brand, hashtag abuse has a long history relative to the existence of social media. What often starts as a beautiful, selfless hashtag, can quickly get degraded into a self-serving tool to gain internet points.

From the Paris attacks that shook us all in 2015 to the emerging BLM movement and everything in between– we need to understand that social platforms aren’t always equipped to take it upon themselves to manage hashtag usage properly. So, we as individuals that make up a greater whole need to educate ourselves and strive to make a difference.

Because these small changes could save a life.

How a hashtag could save a life

The 2015 crisis that hit Paris showed us, once again, the level of potency that social channels like Facebook, Instagram, and Twitter hold. The hashtag #PorteOuverte spread on social media after a startling series of attacks broke out in Paris. This hashtag, which means “open door,” started spreading as a way to offer shelter after dozens were reported dead and many reported taken hostage in multiple attacks.

For those appreciating the humanity that emerged amidst a dark undertaking, they unknowingly became a hindrance to the effort. Mass retweets and tweets that didn’t offer any assistance to those in need flooded the hashtag, making resources and locations for shelter difficult to find, directly putting lives at risk.

Although all tweets were heartfelt and supportive of those offering assistance, their posts inadvertently made #PorteOuverte a challenge to navigate. So, while social media is a powerful tool meant for sharing not only information but also sentiment, we need to understand that what we flood the internet with holds serious weight.

How a hashtag could fight a history of discrimination

The ongoing Black Lives Matter movement is not a new one, but today, its impact is more powerful than ever thanks to the trending hashtag that made it possible and powerful. This is not because we’re all fed up with police brutality or discrimination all of a sudden. George Floyd may have been the tipping point, but we’ve seen worse injustices that illustrate the why behind the movement in a clearer light.

For example, Breonna Taylor, mistakenly gunned down when police raided the wrong home is still seeking justice. This innocent black woman whose injustice was a solid example of police brutality going on without consequence didn’t get the uproar it deserved.

The point? The power of a trending hashtag is priceless. And the power of two trending hashtags simply can’t be ignored. #BlackLivesMatter worked hard to bring the issue to light while #BlackoutTuesday, regardless of its origin, drove action and demonstrated a flood of support through strict calls for change. And yet, this powerful combo was often misused and detracted from the impact of the movement. I’ll let these instagram posts elaborate: 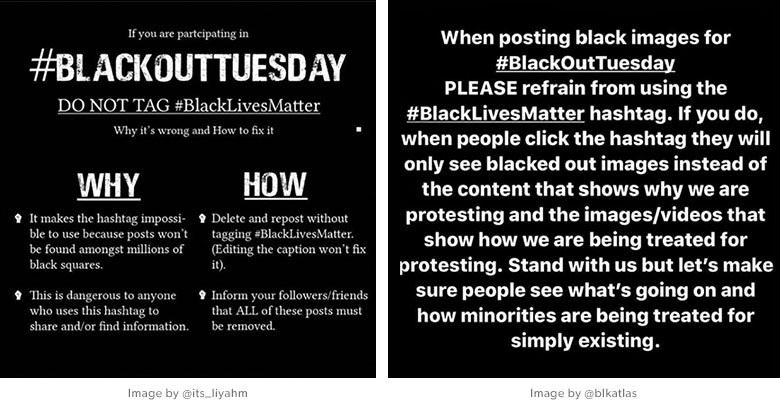 Standing united during times of crisis needs to start with a sense of social responsibility. Because each social platform doesn’t have a plan in place for every type of crisis or movement to take responsibility for managing hashtag use and abuse on the fly, we need to take on the responsibility. Here are 3 ways you can use social media more responsibly during a crisis or social movement:

Start by understanding the why behind a hashtag. While the purpose of every hashtag is to gain popularity and sort information, there is always a grander why. In the case of #BlackLivesMatter, it was to educate on social injustices, provide social proof, and deliver resources to educate ourselves on racism and discrimination. #PorteOuverte, on the other hand, was meant to function as a way to connect people in need of shelter and provide immediate access to a means of evacuation. Once you know the why, you can better understand when to use the hashtag, and more importantly, when not to use it.

Seek out alternative hashtags during tumultuous times. There are typically a variety of topics and hashtags surrounding a single event. Seek out the one that fulfills the why behind your post. Are you posting to show support? Is it to spread information? When you search a hashtag, Instagram will typically show related ones alongside it. This is a fast and easy way to keep conversations going without disrupting a key hashtag during a crisis.

Avoid hashjacking for the sake of getting eyes on your content. A bit of self restraint in these situations makes a big difference. While most social media platforms reward an onslaught of content regardless of deep and genuine value, we need to fight the need for that extra like, share, or comment. Really work to make your content matter.

We encourage you to make a difference on social media and beyond. Take action today by educating yourself and becoming a more informed friend, neighbor, coworker, and consumer.

And, please, share this article on social media etiquette to encourage a more responsible way of participating during urgent and timely social issues.