In the first post of this series, I wrote about my belief that most marketing creative work doesn’t tell a good story. While I’m far from the first to reference author Kurt Vonnegut’s brilliant presentation on the shapes of stories, it may be new to many marketers, and it’s full of indispensable lessons that can help us recognize and tell stories.

“The first step to improving our storytelling skills is to recognize when a story is smack dab in front of us.”

Its shape is simple: someone gets into trouble, then gets out of it and is that much better off for the lessons learned.

For the visual learners: 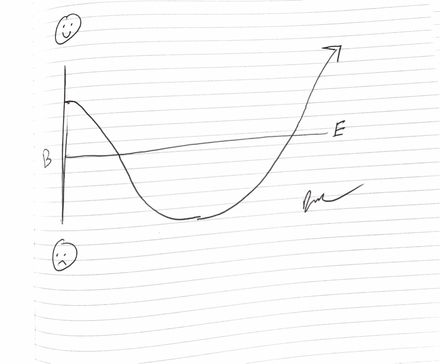 The action movie classic Die Hard that has spawned countless poor imitations is as man in a hole as man in a hole gets (if you haven’t seen it, skip this paragraph and go watch it right now). John McClane, a grizzled New York City cop, is visiting his estranged wife for Christmas in LA, when a german terrorist spoils his holiday plans and takes her entire office building hostage. A couple bare-knuckle brawls, gunfights, and a Yippee-ki-yay later, Hans and his thugs are vanquished and John is holding his wife safe in his arms — proving a hostage rescue goes a long way towards reconciling a marriage.

Or what about almost every episode of every sitcom. Each week millions of people tune in to watch their favorite lovable cast of characters get into silly hijinks, only for them to get out of the trouble and become that much better friends because of it.

It’s a simple story shape, but perhaps the most common for a very good reason. Our lives are made up of almost constant ups and downs. We get into problems on a daily basis, then we get out of them and like to think we are better off. Rinse. Repeat.

My last shapes of stories post uses this story shape. I’ll let you be the judge of whether I did so successfully, and move past shameless linking by actually posting it below, with comments as to how each section moves the story along its shape:

Whenever I hear advertising and storytelling used interchangeably, I cringe. That’s not to say marketing creative can’t tell a story, but let’s be honest — it usually doesn’t.

If I asked you to tell me the best story you’ve heard in the last week, are you really going to bring up a retargeted banner ad? Does YouTube pre-roll ever overshadow the video that follows it?

There you are in your hole, you’re a marketing creative who wants to tell stories and this article is putting down our collective efforts. Maybe you're sad, or mad, maybe you disagree, but either way I want you to respond negatively.

As marketers, our job in its simplest form is to communicate so well that it persuades — to interrupt someone’s life for a split second, and in that split second tell them something that they not only won’t be able to forget, but that will change the course of their decision making.

Tall order, huh? It’s no surprise then that when advertising succeeds even a small fraction of the time, it’s an incredible success.

When a major league hitter winds up on base ⅓ of the time, they end up with their bust in the Baseball Hall of Fame in Cooperstown. If the next website I write converts like that, I will be carried out of our office like an anointed reincarnation of David Ogilvy, but of course without as many pithy quotes.

I dig the hole deeper. We are failing, constantly. I even hyperbolically compare myself to a hall of fame batter. They are trying to hit 100 mile-per-hour fastballs flung at them by performance enhanced (allegedly) pitchers who’ve spent their entire lives perfecting the art of throwing an unhittable ball. And they are succeeding, way more often than we do.

If we want our creative to resonate, it needs to tell a story. An actual story. Something that moves from A to B to C to D, that has internal or external conflict, tension, closure, or hell even a lack of closure.

As much as I hate to be cliche and bring up Hemingway already (give me credit for almost making it 300 words) the efficiency of his writing is proof that stories can be told with brevity. You don’t need to hold someone’s attention for an hour and a half to tell them a story.

One afternoon while having lunch with friends, Hemingway wagered that he could craft an entire story in six words. He wrote “For Sale: baby shoes, never worn” on the napkin and immediately collected his winnings.

Proof that even before today’s onslaught of second to second media, the storyteller that can elicit an emotional response faster wins.

Light at the end of the tunnel appears and a solution is offered. I don’t tell the reader how to get out of the hole, but I let them know it can be done.

The first step to collectively improving our storytelling skills is to recognize when a story is smack dab in front of us. For that I defer to another master author, Kurt Vonnegut.

Vonnegut recognized common threads between many of our most enduring stories and charted them across a horizontal axis of time and vertical axis of relative happiness.

In future editions of this blog series, I will be charting each of these story shapes, finding them out in the wild, and discussing the abundance of tools storytellers have at their disposal.

Ultimately, I want to create a forum for marketing professionals to put the story back in brand storytelling.

The rope is now thrown down into the hole, I’ve freed you by including a lesson from a storyteller far more proficient than I will ever be. In fact, you’ve now learned everything you’ll ever need to know about storytelling, and it will be impossible for awards at Cannes to be given out because of the sheer amount of incredible work made by those that read my post.

Try it yourself, this shape can be used for anything and everything. I challenge you to write your next email using it. Put the recipient in a hole, and then show them the light that will set them free.

Learn what other story shapes you can use to empower your brand.