This is the fifth post in my Shapes of Stories blog series in which I’ve introduced author Kurt Vonnegut’s straightforward storytelling shapes to convey the simplicity behind our culture’s most popular stories — all with the goal of improving how we shape our own messages. I’ve covered the “boy meets girl” and “man-in-a-hole” shapes, and tried my best to plead the case that storytelling is more than a bad buzzword.

Today’s post will focus on what we can learn from a girl with a vile stepmother.

In Vonnegut’s words, “It so happens that this is the most popular story in our civilization, western civilization. We love to hear this story, every time it’s retold, someone else makes another million dollars, you’re welcome to do that.”

During his anthropology graduate studies at the University of Chicago, Vonnegut noticed that the Bible’s New Testament and the enduring folk tale Cinderella followed nearly the same shape. He posited that the shapes of the stories that a culture holds most valuable reveals things about that culture, and submitted his findings for his master’s thesis. While his professors rejected the thesis (because “it was so simple and looked like too much fun”), Vonnegut considered the shapes his “prettiest contribution to culture.” 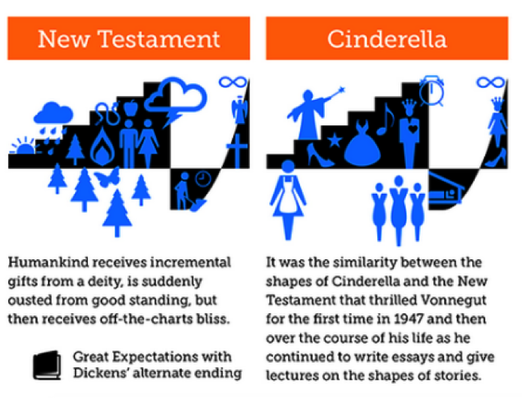 The Cinderella story shape is the first of Vonnegut’s story shapes I’ve discussed that starts in a depressing place, a rare beginning for a popular story. “Boy Meets Girl” and “Man-in-a-hole” both start on average days that soon either trend upward or downward, but not Cinderella.

Cinderella’s mother is dead and her father is now married to a terrible woman with two terrible daughters. To make matters worse, there is a grand ball that night that she can not attend because her step-sisters have destroyed her dress.

Things could not be any worse for Cinderella. Queue the fairy godmother who bestows incremental gifts, the destroyed dress becomes a beautiful gown, her pumpkin is now a carriage, and so on and so forth. But the fairy godmother’s spell breaks at midnight, so Cinderella must flee from the Prince that has fallen in love with her before the clock strikes. Thankfully, she leaves a slipper behind that the prince can use to identify her. The shoe fits and as Vonnegut quips, “she achieves all scale happiness.”

Not a Cinderella fan? Instead, think 80s movie classic “The Karate Kid”. Daniel’s life couldn’t be any worse. He’s just moved to a new city and is bullied away from the girl he’s fallen for, but maintenance man Mr. Miyagi comes along and slowly bestows the gifts of ass-kicking to him. All is well until Daniel’s leg is swept at the Karate tournament and he is left writhing in pain, unable to earn his much-needed redemption. But despite the dirty tactics of the Cobra-Kai dojo, Daniel is able to crane kick his bully in the face. Plus, he gets the girl. Like Vonnegut said, all scale happiness.  ​ 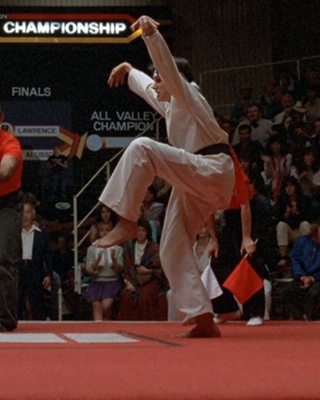 Daniel-san trying on the slipper

This story is everywhere, from other inspirational sports movies like” Rocky” to 90’s teen comedies (yes, I can argue that “American Pie” is the Cinderella Shape).

Every year before March Madness, CBS, ESPN, and every other sports publisher spends hours and hours of radio and television airtime, and invaluable print and pixel real-estate simply speculating who this year’s “cinderella” team will be — which small, scrappy low-seeded school will stand up to the titans of college basketball and make a run deep into the tournament. And the public eats it up. We fill out brackets boldly predicting our cinderella's and debate them with friends and co-workers, even the President gets involved.

As Vonnegut promised, almost every time the Cinderella shape is used someone makes “another million dollars.” All-knowing data has confirmed the arc is the most popular story shape.

We love “cinderellas” because we love to root for the underdog.

There is a fear in every person that the machinations of our society, culture, business organizations, and governments are too resistant to change for us to have any real effect. That our personal limitations will cap our lives and careers where they currently stand. That we are at the will of greater forces than ourselves. I believe that almost everyone wants to feel more in control of their own fate.

When the underdog succeeds, it inspires us that we too can overcome the environmental conditions around us, and our own personal limitations, to make things the way we’d like them to be.

As marketers, it is our job to shape and tailor our communication and messages in a manner that people will be receptive to. I’d stand to wager that communication that mirrors the shape of “Cinderella” will have an effect.

I’m not implying that every ad must begin with your consumer crying in the fetal position until they are slowly saved by your product or service and ultimately, after a vast obstacle, bestowed total brand happiness. But I do believe that these story shapes can and should be used to mold each and every message we communicate.

If you and I have a business conversation, and I first mention a difficult problem our business is facing, followed by a step by step description of how I plan to solve it, but next bring up a treacherous open risk, before ultimately letting you know how I will solve for that open issue, I’ve used the Cinderella story shape.

Just compare that to other ways that message could have been communicated. If I mention the problem, followed by a daunting open risk, you will identify the problem as unsolvable — no matter how many solutions I offer, I’ve framed it too negatively and you will not be inspired to take action. If conversely, I front load the conversation with good news, you will tune out, “if it’s all this easy, why are you bothering to tell me?”

Next time, make yourself the underdog. 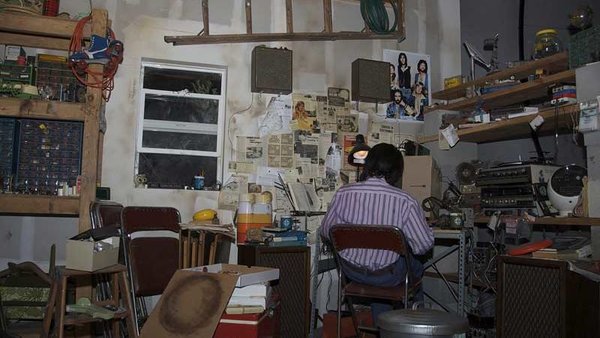 The origins of the desktop as imagined by Disney’s Spaceship Earth animatronics (is it Woz or Jobs?)

Just think about the founding stories of some of the world’s most popular tech brands. The stories told are about Bill Gates and Paul Allen building computers in their garage or the counterculture college dropout Steve Jobs fighting tirelessly for his vision to come to life. In fact, Jobs’ career is often retold with a Cinderella shape. How he first built Apple from nothing year after year into the titan it became, only for the company to fire him, before his triumphant return in which he led the company to unparalleled heights with the launch of the iPod and iPhone.

This shape is everywhere. If you aren’t using it to help shape your communication, you are missing an opportunity to leverage our civilization’s favorite message.

Fascinated by how stories can shape the world around us? I’d love to have a conversation about your favorites.