Today marks the much anticipated launch of the iPhone 6s. What’s changed? Well according to Apple, everything. “Everything” includes a brand new faster processor, an improved camera, 4k video recording, as well as two cool new features Apple has named 3D touch and live photos.

I’m most excited about 3D touch, which may sound like an abstract or “me too” concept but I believe it’s going to play a pivotal role in evolving user interface and experience design. It basically enables your phone to not only detect when you move your finger left and right, or up and down, but also through the screen.

The way I explained it to my mother the other day is that it allows you to right click on a phone they way you would on a Mac or PC. In the home screen, pressing harder on an icon reveals a context menu. For example, pressing down harder on the phone icon will reveal a list of common contacts – haptic feedback lets you know you’ve “right clicked.” Within an app, there is endless potential for new interactions, like the ability to preview an email before you waste precious time and open it.

Apple is calling the normal button click a “peek,” and the push through a “pop.”

While I’m personally not a huge fan of 3D as a name, it’s accurate. We’ve been limited to 2-dimensional, gestural based multi-touch interfaces like tapping, swiping, and pinching. With 3D touch, Apple is expanding beyond the X and Y axis to incorporate a third Z axis that allows designers, developers, and creative technologists of all kinds a new level of control over how the user experiences an application.

Android has had right click functionality for some time but if Apple has one thing going for them, it’s the ability to rally a crowd. They certainly weren’t the first to the e-wallet / payments game but Apple Pay’s growth and integration across major retail chains like Whole Foods has led to a tremendous growth in contactless payments. Tim Cook believes that Apple pay will be accepted by 1.5 million locations in the U.S. by the end of this year.

According to a report from Juniper Research, this will drive the number of mobile wallets using contactless tech to 200 million by the end of 2016.

When Apple takes a stance, you should pay attention.

It’s Not Where You Come from, It’s Where You’re Going

Gestural and multi-touch interfaces, that threaten to make the mouse and keyboard a thing of the past, are now paving the way for deeper interaction with touch-based user interfaces.

These deeper interactions reveal the capability for a more streamlined UI language that incorporates Apple’s flat design or Google’s material design to simplify user interfaces for how they are actually being used; as opposed to the dreaded skeuomorphism, in which the interface tries to duplicate its real world counterpart, regardless of how difficult it may be to interact with. Elaborate, heavy design styles are a thing of the past, now it’s all about reduction and beautiful simplicity. By limiting a user’s choices, you eliminate analysis paralysis.

Force touch allows for a whole new dimension of interactivity; context menus, right clicks, additional menu controls, hover states, down states, double taps, and hold based interactions- all within the control of the tip of your finger.

The future of touch will enable users to explore and find information on products in much more intuitive ways. The Google named micro-moments, in which we use our devices to satisfy our needs the moment in which they are established, will be empowered by deeper levels of contextual information than you would be able to reach with the point and tap.

We’re moving to an era where card-based, clutter-free UI experiences will trump the kitchen sink approach designers have taken in the past

It’s not hard to believe that we may be able to digitally send textures in the near future that will allow consumers to experience e-commerce like never before. Imagine being able to feel the denim of the jeans or the thread count of the sheets you are about to purchase online. This will obviously require further technological development, but just as gesture based interactions gave way to force touch, force touch will give way to the next technology borne from asking what if? Disney is just one of many organizations that is exploring the interaction between the physical and digital world, their research lab is invested in exploring the use of computer inputs to trigger true human multisensory experiences.

We are entering the era of the arms race for who can create the most human-centric interface design. Apple has been at the forefront of recognizing and adapting to human behavior. When people started taking selfies, Apple upgraded their front facing camera, added selfie modes, and now in iOS9 the camera roll even automatically categorizes selfies into a separate folder.

Apple will continue to pick up on emergent behaviors and adapt their design to meet the needs of the human user.

What This Means for Experience Designers

Smart game publishers like Tilting Point and Super Evil Mega Corp, makers of games like The Sleeping Prince and Vainglory, have already been leveraging the graphical and CPU power of the modern device with great success. I can’t wait to see what game developers will be able to accomplish with the faster processor and haptic capabilities of the 6s, I’m sure whatever it is will keep me up unreasonably late playing the game in bed after my wife has fallen asleep.

New hardware capability, like 3D or force touch, will allow us more and more control over how we experience multimedia and interact with games, videos, and social platforms. Think commerce capabilities inside of video or audio; you want a product someone mentions on a podcast, simply “pop” to buy it.

The Z-axis is going to inspire an evolution in movement and motion design that creates a new depth of interaction and interface pattern design, all a dimension deeper.

With today’s nonexistent barriers to entry, we are all content creators with the potential to reach an unlimited number of people at any time.

I’m excited for the high fidelity photo and video content will reach when we all have 4k cameras in our pockets. Today’s live steamer can now produce video quality that not long ago required a much more expensive and cumbersome camera rig.

Like it or not, the smartphone is now the center of our universe. It’s our remote control, our memory capture device, our calendar, our connection to our social lives, and our work personal assistant (that sadly doesn’t take the weekend off). Maslow’s Hierarchy of Needs should to be updated to include WIFI and battery life as primary needs that must be satisfied before we even begin to address our psychological well-being. 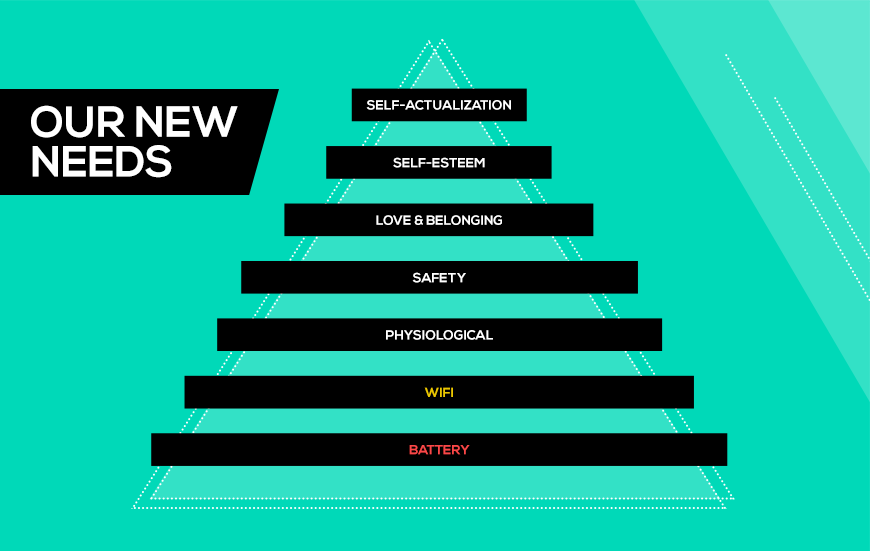 The Z-axis, reached through force-touch, will allow millennials, plurals, and future generations to experience content in ways older generations never fathomed possible. We will immerse ourselves further and further into our devices with the proliferation of virtual reality and other technologies that blur the distinction between our physical and digital worlds. Anxiety, ADD, ADHD, and FOMO aren’t going anywhere as the growing pains of a technological evolution will demand we adapt.

And just in case you needed to feel old, Tim Cook has now launched more iPhones than Steve Jobs.

Wondering more about how to push your product design to incorporate these new interaction patterns? We’d love to talk to you.