I’m a big believer in passion projects. Whether it’s something you do just because you’re feeling creative and want to do it or it’s your own kind of side hustle that you’re looking to make something bigger out of, passion projects are important. I can only go so long in designing things other people/clients care about.

At the beginning of the year, I had a goal that I wanted to expand my visual range and style as it pertains to design. Thinking about how I would do that, the only thing that was clear was that I would need to make up my own project.

Quickly, if not immediately, I knew I wanted to design beer labels, but the concept behind them wasn’t so clear. At first I thought maybe I’ll do beers based on towns in Connecticut, but then I realized how fucking boring that sounded.

One weekend, I ended up randomly watching Captain America: Civil War — probably my favorite of all the Avengers/Marvel movies — and thought superhero beer cans would be awesome. By the end of December, I knew what I wanted to do. Now came the difficult task of figuring out when and how I would do it.

Passion projects can die quickly. You work on it for a night or two and then you either get bored or something else takes priority and you never end up finishing. I didn’t want this to happen. So I took the concept of superhero beer cans and focused it more on The Avengers. Why the Avengers? I knew Endgame was coming out in April, so timing for the project to be done by the release date did two things: It gave me a LOT of runway and time to make something and it also kept me focused on a deadline.

I landed on the name Avenge Us Brewing Co., playing off all the fallen superheroes from Avengers Infinity War.

Time. Time is the hardest thing to find when working on passion projects. Between work, family, and responsibility, it seems damn near impossible, but it’s never going to just fall into your lap. If you really want to do something, you have to make the time, and sacrifice, to do it.

In the winter, Digital Surgeons gives us a nice two weeks off for the holidays. I knew that was the perfect springboard to start. So, while we were closed, I still came into the office for a couple of days. I don’t like to work from home because I’m too comfortable, which leads to breaks in concentration, but just the thought of waking up early and forcing yourself to go into the office really puts some motivation into getting shit done. I didn’t just drive 45 minutes to an empty office to sit at my desk and watch Casey Neistat videos (even though his channel is awesome). 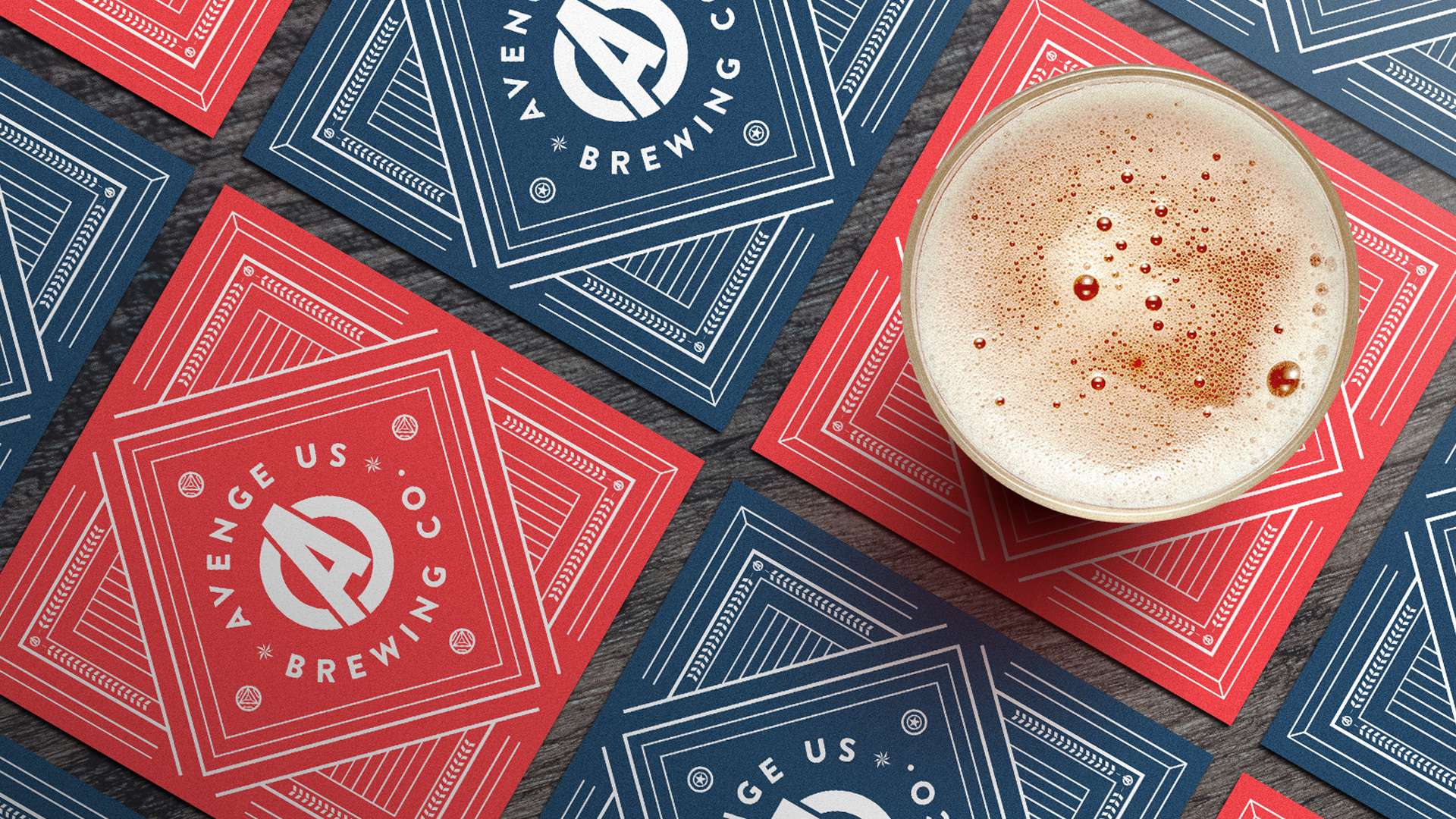 The first day, I just worked on the overall brewery branding. The logo, mainly, but also just some mockups for fun. I was really inspired by the Avengers costumes and the level of detail that went into them, specifically the stitching. 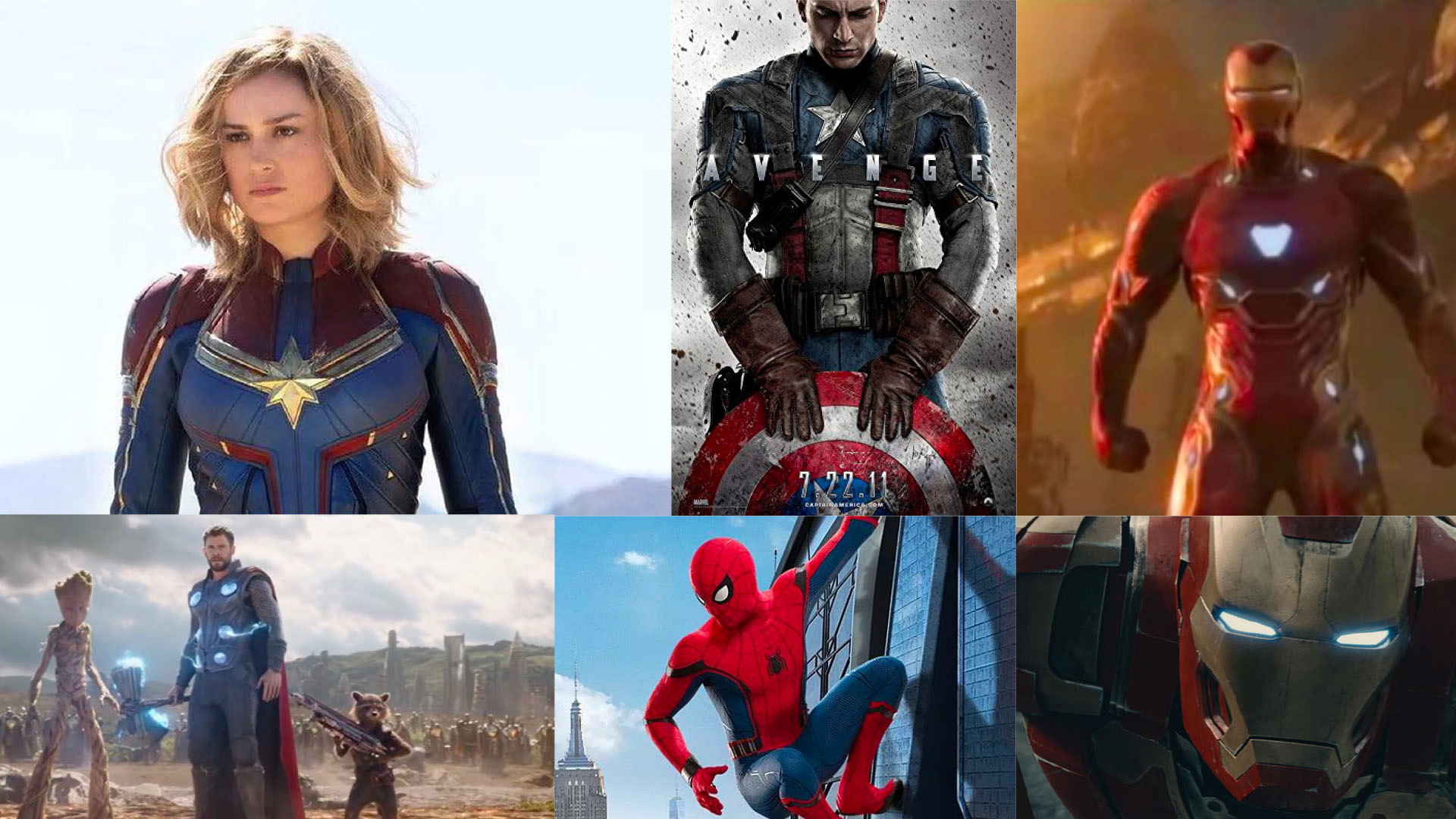 This is what would lead to the design of the coasters and an early iteration of can label designs. 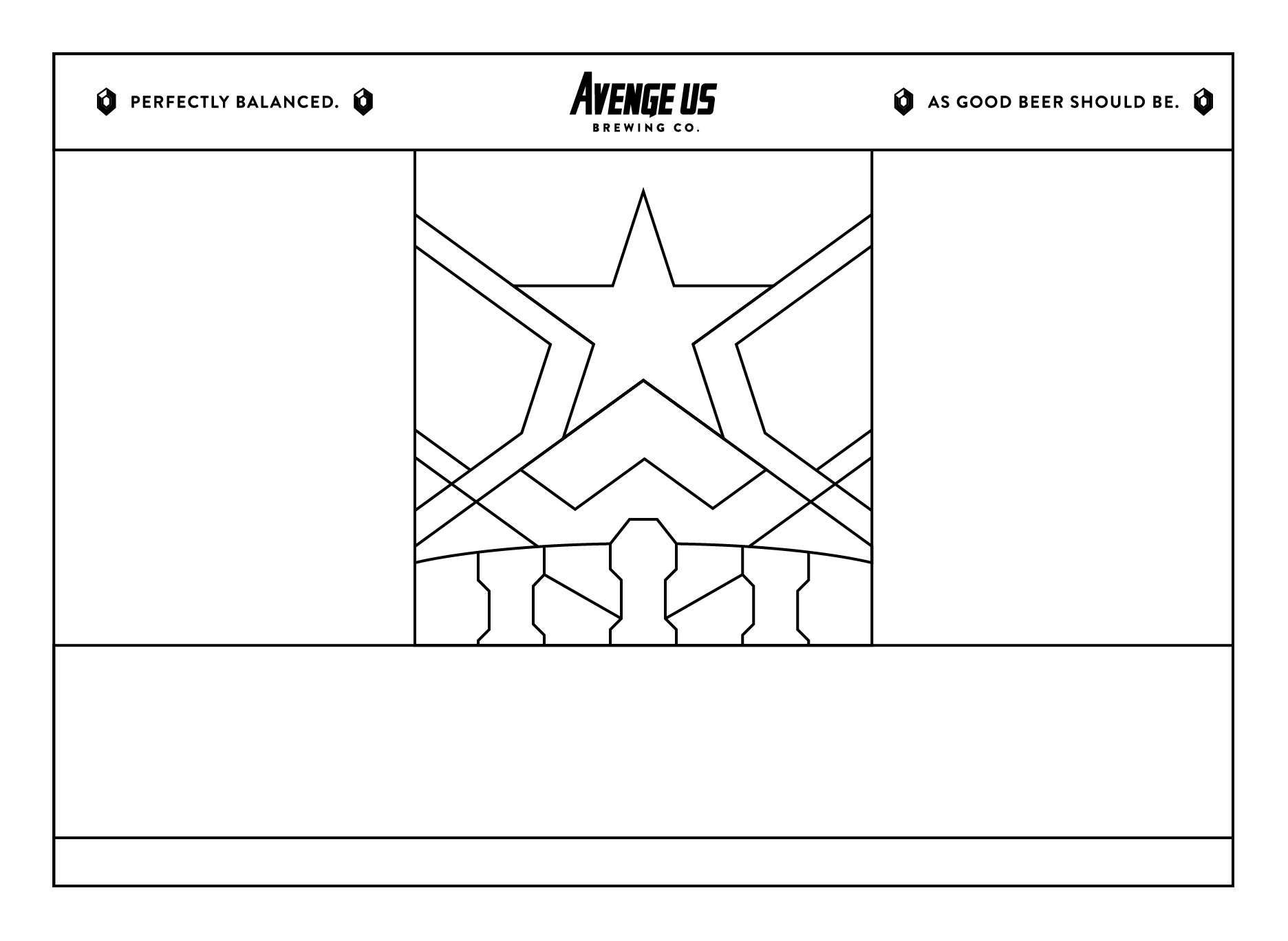 The second day I realized that the idea of having the design be based on the Avengers costumes seemed cool, but it was too cluttered. I knew I wanted to have descriptions of the beers and, with this design, I wouldn’t be able to do that. I needed to simplify. 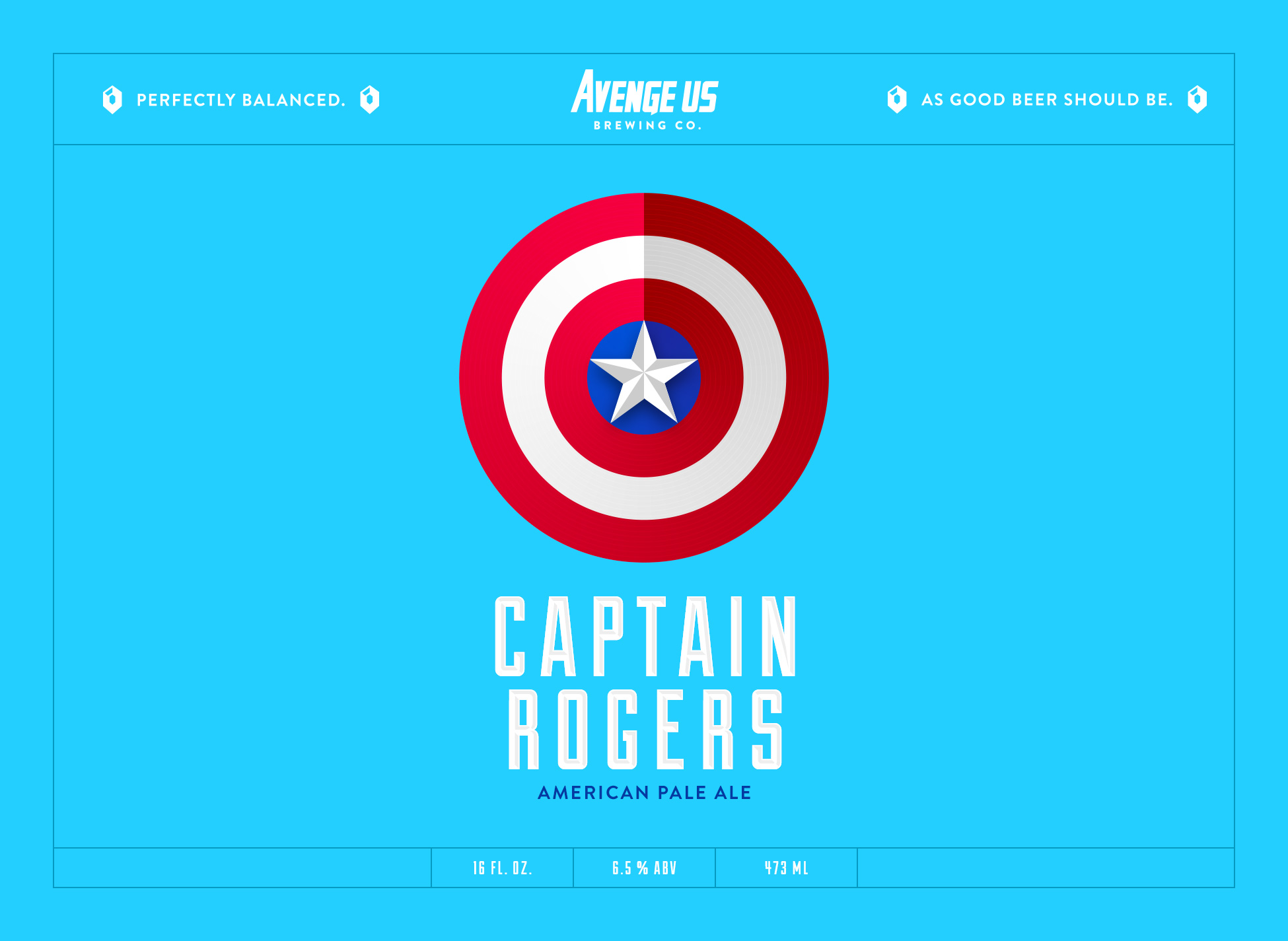 Simplifying helped a lot. I decided to go with emblems of the heroes instead of customs. This way, I could use a focal point on the design that captured that Avenger’s identity while still leaving room for other elements, like the beer description, which I really wanted to embellish with descriptions that tied to beer but also the character the label was for.

“Originating from an old recipe crafted in 1942 during WWII by Dr. Abraham Erskine and later revised by Howard Stark, Captain Rogers APA is a galaxy-focused pale ale with a ton of flavor that punches you in the face and feels like it can do it all day. This beer has a high moral compass when it comes to flavor and isn’t willing to compromise it for anything less than what it believes in, which is providing hop-forward, balanced beer for the people.”

So, after two days, I was feeling pretty good about the direction I was heading in. I had a style, and a concept, now I just needed to design out the rest of the cans. Once our holiday break ended, I knew my time to work on Avenge Us would be extremely limited. I was so fucking excited about it though, I couldn’t wait to work on it again.

I normally get up at 4:30 am most days and go to the 6 am CrossFit that’s in District — the same work and play campus that DS’ office is in. I would normally do the 6 am to 7 am class and then kind of just hanging out and do light exercises afterwards until 8 – 8:30, then shower, clean up, and be at my desk at 9 am. Here is where I found some time.

Instead of hanging out after the class, I would just immediately shower and get to the office by 7:30. This gave me an hour and a half every day to work on Avenge Us. This got me pumped. I’d look forward to that time every day to work on these labels. Then I got to Thor’s design…. 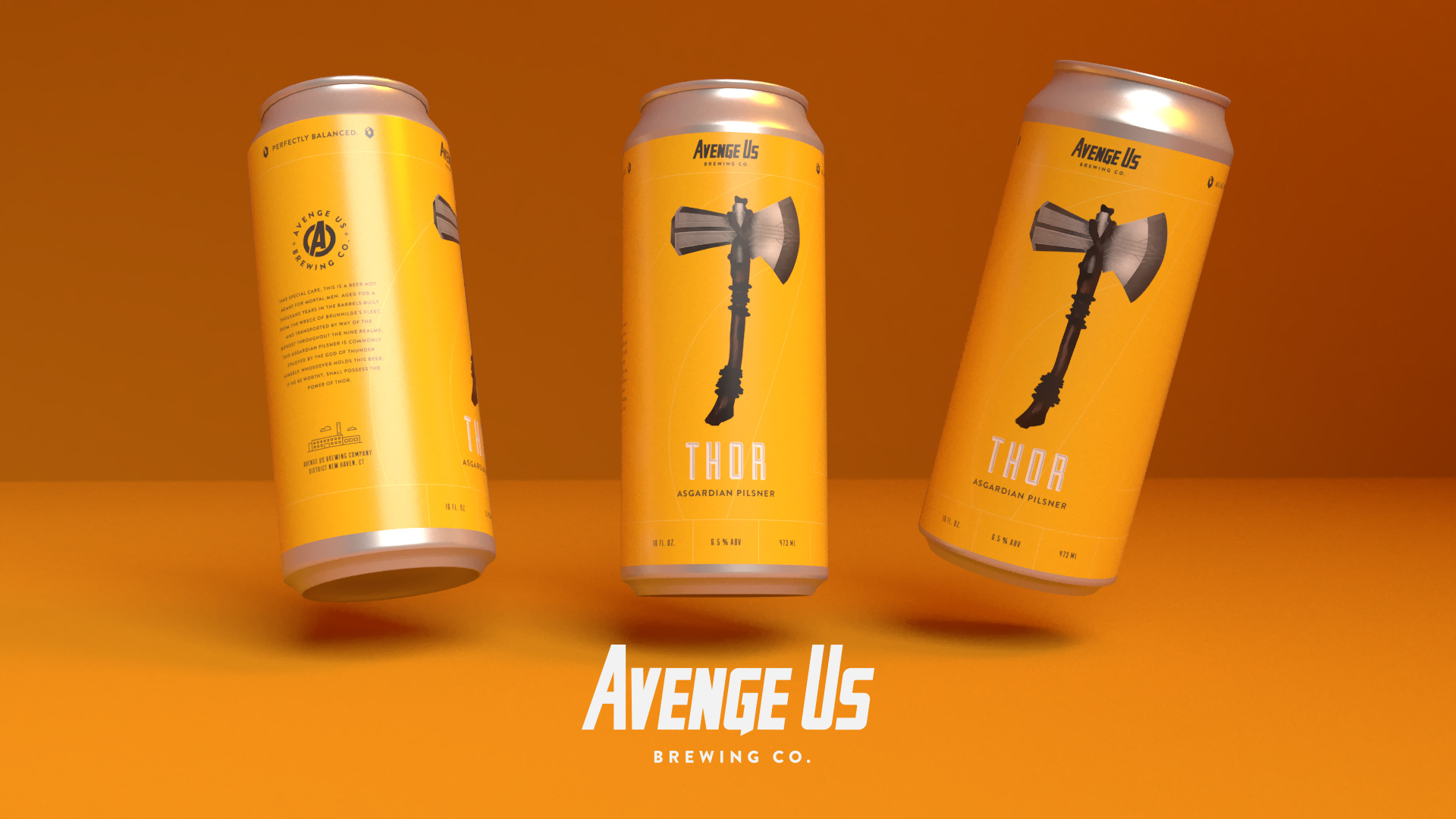 Captain America has his shield, Iron man has his chest piece, and Thor has his hammer…or in this case, Stormbreaker. I realized pretty quickly that there was no way I could create a SIMPLE vector style illustration of Stormbreaker. So, I started designing it thinking, “Fuck it, I’m just going to give it a ton of detail.”

I loved designing this. I’d never attempted designing such a detailed piece from nothing. This was all done with vector shapes, shading, and texture masking.

Feeling really good about Thor’s design, when I put it next to Cap’s APA and Iron Man’s Stark Stout, I realized they didn’t look like they went together. “FUCK,” I thought. “What do I do now?” I had two of the four cans done. They were in a spot where I was comfortable with the design, but I knew the same style wouldn’t work for Thor.

Like I said, I loved crafting Stormbreaker. I wasn’t going to change it. The whole point of this passion project was to expand my style. Thor’s can was the greatest example of that, so I decided to carry that level of detail through to the rest of the cans even if that meant starting Captain America and Iron Man’s over. 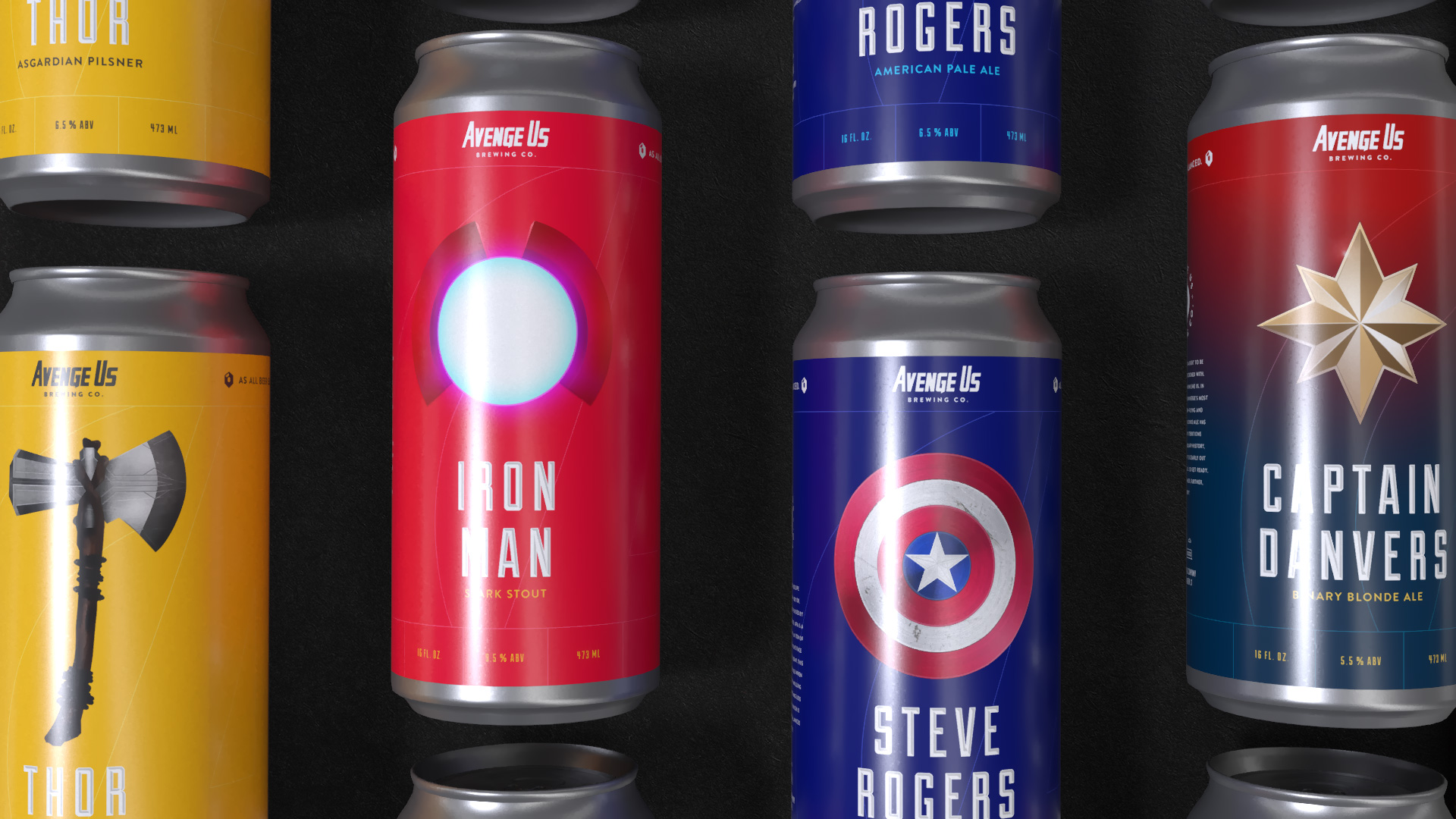 Fast forward. All my labels are done. Now what? I looked for beer can mockups, but everything I found looked like shit. Figuring out how I was going to present these labels seemed like it was going to be tougher than designing them.

And then Alex Hornak, a designer on the DS creative team, showed me a few quick tips in Adobe Dimensions — a program used for simple 3D modeling. HOLY SHIT. After that I went to town. Diving deep into all the features of Dimensions, I experimented with lighting, textures, and shadows. Now, I could control exactly how I wanted to show the Avenge Us line. 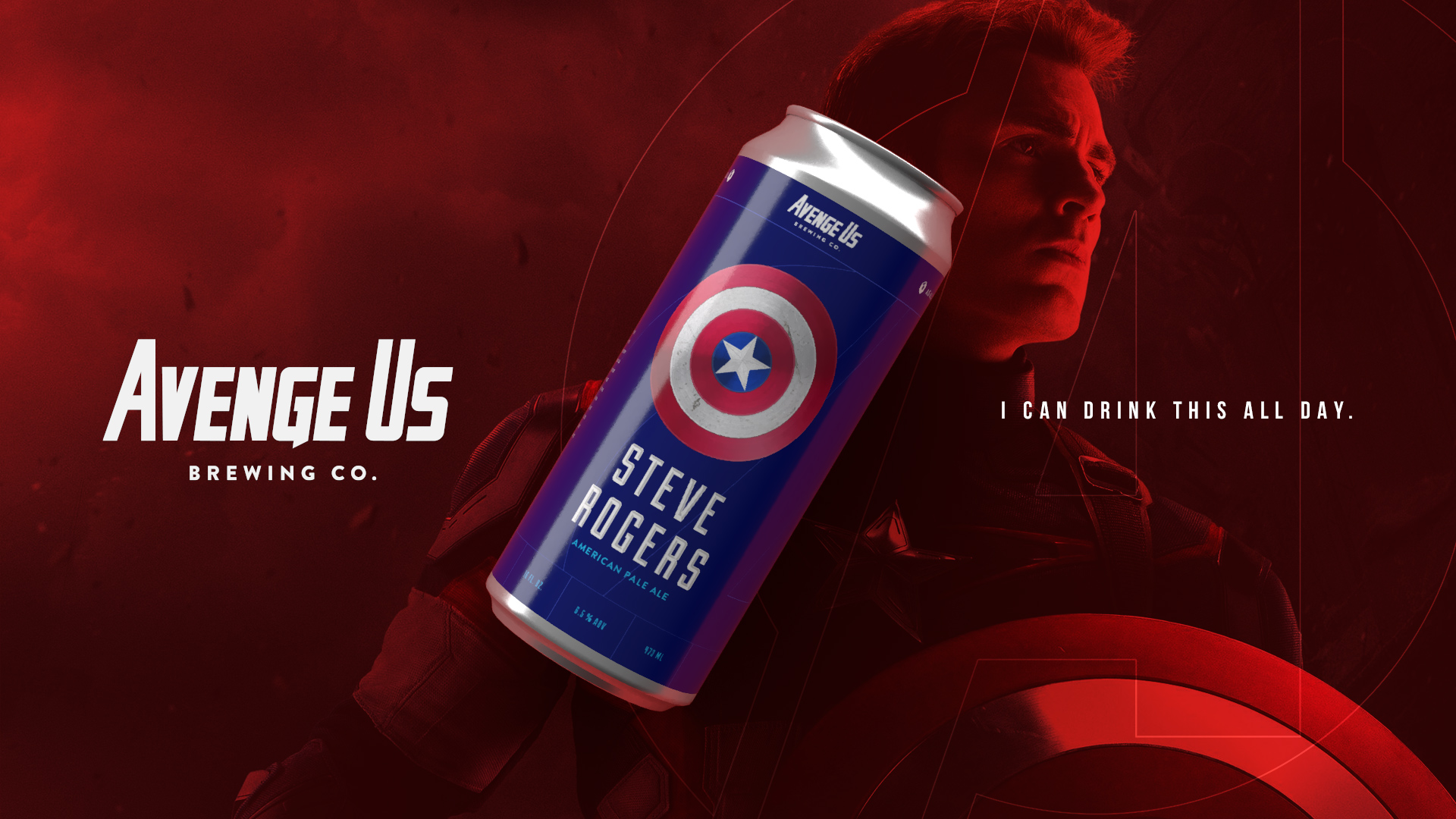 So here we are. It’s the week Avengers: Endgame releases and my passion project has come to a close. I met my deadline, expanded my style, learned new tools. Shit! I even wrote copy!

Not every design project is fun. Some clients are tough to deal with, some have even pushed me to seriously consider switching my career to become a mailman, but passion projects like this make me realize how much I love design.

Shout out to James Dowd, who wrote the awesome descriptions for Thor’s Asgardian Pilsner and Captain Danvers’ Binary Blond Ale.

Check out everything done for the Avenge Us Brewing Company on the Behance case study.