How it all starts.

How many of you have worked for 2+ hours in a file only to realize you haven’t named it? Now in that moment you realize that losing a few hours of work isn’t a good idea and it would be a smart move to go ahead and give it a name. So you name it something ridiculous, probably not very indicative of what it actually is. A few days pass and you can’t seem to find the file, and well; obviously your coworkers can’t either. Then it comes full circle later when your CEO wants to use that visual in a deck he or she is making for a new business opportunity and your file is nowhere to be found.

But you see, it gets deeper. Odds are if you’re the type of person that did the above, your file is a mess. Which I would argue, the folder containing that file is also probably a mess. I’d continue to say that the parent level folder is most likely a bit disorganized as well. Forget about things like layer names, fancy reusable symbols, super high resolution smart objects, or any other seemingly useful workflow that contributes to long term efficiency. Bad habits like this eventually get you to a point where it severely hinders your team’s productivity. Not everyone may know this, but you’re to blame.

“Untitled_1” is a mentality. It’s a state of mind.

You’re the type of people that need the pressure to get something done. Even if that means waiting until the work day is over to start something so you can show up the next morning claiming you worked all night. You’re the scrappy type. You’re the people who “hack” things together. And I applaud you for getting stuff done “quickly.”

Sometimes you have to scramble to get something done. I get it, we all get sloppy sometimes. But I pose the question, is sloppy fast? Can you outrun someone who is naming every single one of their layers? Or cross the finish line before a coworker makes a few folders that are named appropriately? Probably. But only for a very brief dash.

Efficiency when simplified is really about increasing speed and quality, while reducing cost and time.

You following? If not, your clients are.

So, you cranked through something to hit some arbitrary deadline. Your computer is chugging, you can’t see your wallpaper because your desktop is littered with random files and your recycle bin has several thousand items waiting to be deleted. To add to this sh*t storm, you just got a pop-up notification saying your scratch disk is full. Now your computer hates your working style just as much as anyone else.

Kudos to you for meeting that deadline. The client loves it, and the project is a go. They love what they saw and they want to see more. “When can we see something next?!?” Well hell, here you are. Stuck. You now all of a sudden are forced to make a choice between two scenarios, if you’re lucky.

Choice 1: The files are a complete nightmare and the only way to salvage that dirty used toilet paper is to rebuild everything.

Choice 2: Delegate the “remaining” work to someone else and magically it becomes their problem. Good luck telling them they’ll need to start from scratch. I’m sure they’ll love you for that.

Either way, you’re starting over, (hopefully). However, this time… your timeline probably doesn’t account for a reset since you’ve dug yourself a hole filled with nothing but sporadic efforts that don’t get you across the finish line. You know we’ve all been there.

So, you won the dash. But you didn’t win the race. Your opponent will catch up, and when they do they’ll blaze by you and continue to increase the lead, drastically. 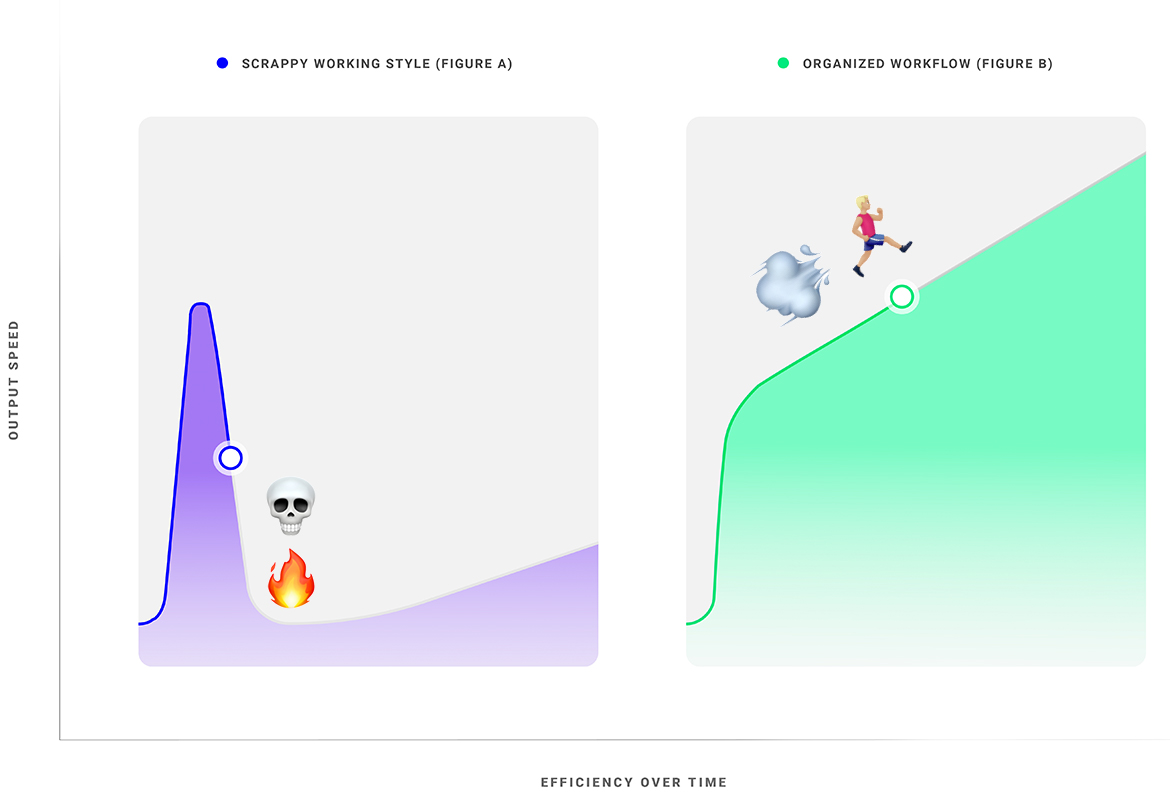 (Figure A) shows the scrappy sprinter. Unbelievable speed out of the gate meeting an end date and then plummeting to where they started. Once they’ve hit rock bottom, efficiency slowly begins to increase over an extended period of time. But valuable time and money is wasted.

(Figure B) illustrates a more methodical workflow starting at the very beginning. Although marginally slower on the speed axis, developed efficiency over a period of time is exponential and continues to increase.

Now I’ll admit, I am a bit type-A when it comes to organization. However, you can’t fault organization for hindering efficiency. If you’re organized, you’re in the race to win. But the best part is, you get faster over time. You’re supercharging your future self, and everyone that comes in contact with your work. You’re unlocking valuable time to work on the things you want. Even though that may seem like folklore.

No you don’t need to be hyper meticulous about file names or have a layers window so clean you can eat off of it, but you can be smart about your workflow decisions that unlock ease of use for your entire team. Yes, I’m telling you to ditch the mentality that you’re in it alone, because majority of the time; you never are. When was the last time you built or went into a file that ONLY YOU will ever touch??? Can someone unfamiliar with the project or business folder find your latest file? If not, shame on you.

You see, when you think about your entire team from the start you’re already making everyone’s jobs infinitely easier. By making their jobs easier, they’re faster, which allows them to deliver better quality at less cost to your clients or at least your own company. So when you neglect being a decent teammate understand the repercussions “hacking” has on your team. Your project manager won’t need to bug you for that client logo you’ve already provided 70 times. You developer won’t need to ping you hundreds of times on slack looking for assets they need to finish developing the website you designed. Your intern can hop into a folder, grab whatever assets they need and whip together those instagram posts you don’t have time to do yourself. I could give you countless examples.

As time goes by and as things continue to compound, you’re only getting faster. You can handle more quantity and quality in less time. You’re blazing by the competition in the foot race and so far ahead there is no one in hindsight. So, was winning the first few meters of the race worth it? Hell no.

You see, by not being an “Untitled_1” fanboy, everyone on your team can get some time back in their day. I promise you that time is more useful to them then bugging you as a result of the hot mess you produced in the first place. Remember that what starts out as a single file or folder that’s a mess inevitably leads to whole project folder that is disorganized. After a few months pass, you still haven’t course corrected your trash and now you have several disorganized client / business folders that no one outside of you alone can navigate. So you’ve been sucked into a black hole surrounded by time slippage. And here you are, unable to charge your client for any of that. But at least you won the dash by hacking together something lightning fast. But, now you have to turn around and start all over and do it the right way, while everyone passes by you.

If you keep this up, it’ll lead to individuals adopting your careless mentality, and next thing you know you’re gathered around a table having process meetings with your CEO about ways of working and spending all sorts of money on nifty tools to “have everything in one place.”

Supercharging your team starts with you and the seemingly minor detail like giving that “Untitled_1” doc a useful name. Ditch the mentality and think about your team.