By now, you’ve probably read a few things about the mammoth Microsoft acquisition of Activision Blizzard for $68.7 billion. A mind-boggling number, right? Enough so that the “foothold” in the metaverse that Microsoft says it’s gaining is actually a giant leap forward, moving them into position as the third-largest gaming company in the world behind Tencent and Sony.

So, is this just a power play aimed at quashing the competition?

While there might be a touch of that, that’s not the point. As I’ve argued in the past, the truth is that Microsoft, under CEO Satya Nadella’s leadership, has become more competitive and profitable by being open, transparent, and generous with their previously proprietary products.

Keep looking beyond those eye-grabbing headlines, and you’ll see another ginormous number, which is, in my opinion, the actual game Microsoft is playing. Currently, there are more than three billion gamers worldwide (and only 8% are dedicated console consumers, meaning the world is used to playing online games anywhere, anytime, with what they’ve got).

It would also be short-sighted to say this is just a play for gamers. So, let’s get a bit more granular: What are gamers anyways? Human beings. And what is the most valuable thing people have that all businesses desire? (Hint: Not just their money or time, although both are part of the mix.)

Pay Attention to the Metaverse

Let’s take a quick detour for a minute to focus on what we even mean by “metaverse.” Merriam-Webster devotes a whole page to defining the metaverse, starting with this nugget:

“In its current meaning, metaverse generally refers to the concept of a highly immersive virtual world where people gather to socialize, play, and work.”

There’s an inherent issue here: that definition emphasizes the virtual world itself first and then merely scratches the surface about what people can do there. Crucially, it’s missing the motivational chip: why do people do what they do? Plus, we need more details about where and how they get their desires and needs met.

To me, “metaverse” is just a fancy term to refer to where people are putting their attention that is not the real world. It’s about connecting with other human beings in a digital-first medium.

“Gaming is the most dynamic and exciting category in entertainment across all platforms today and will play a key role in the development of metaverse platforms. We’re investing deeply in world-class content, community, and the cloud to usher in a new era of gaming that puts players and creators first and makes gaming safe, inclusive, and accessible to all.”

As he notes in his book, Hit Refresh, Nadella learned more than two decades ago about the power of inclusivity when his son was born with cerebral palsy. It’s what made him such an outspoken advocate of empathy and human-centric design. The metaverse is, by definition, an inclusive place — it’s decentralized, after all — so that people-first perspective and emphasis on safety and accessibility is a worthy goal. And promise. 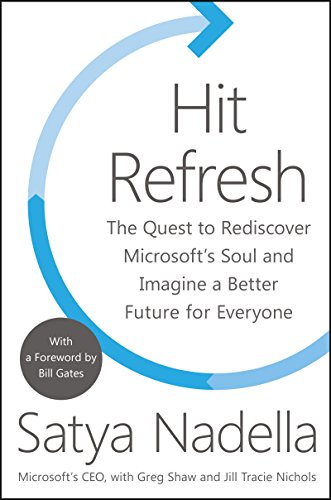 It’s also a giant leap forward for everyday creators from the relative constraints of Web2 platforms, where the owners of the private platforms can tweak an algorithm and decimate your business. Still, it’s hard to imagine huge private companies like Microsoft with responsibilities to their investors aren’t looking to plunder the so-called Wild West of the Metaverse.

Well, time to picture it. If you think it’s about plundering, you’re not paying attention. It’s all about staking a claim and quickly developing the things people want and need — entertainment, utility, value — and embedding your business in others’. So, it’s worth watching, learning, and taking a page from Microsoft’s playbook.

The Game They’re Playing Is… Monopoly?

Ignore the word “Monopoly” for a minute (although arguably that is what Microsoft effectively is doing with its Activision Blizzard acquisition that makes its 2020 $7.5 billion purchase of ZeniMax Media, the parent company of beloved game maker Bethesda Softworks, look like peanuts.)

In the game of Monopoly, the more space you snag early on — particularly valuable space — the wealthier you are over time. It’s that simple. And as mega-companies like the company formerly known as Facebook and now Microsoft lead the way, the clearer it becomes that companies of all sizes need to think about staking their claim.

The building out of the metaverse is fascinating for many reasons, mainly because the infrastructure — the blockchain and cryptography — is already in place and decentralized. Nobody “owns” it. However, there will undoubtedly be centralized services. Don’t take my word for it, though — Chris Dixon agrees and then poses the $68.7 billion question:

Using blockchains to build networks helps ensure that the effects don’t accrue to the service but instead to public goods. That way, you get the best of both worlds: powerful, centralized services (what Web2 did so well) and openness (what Web1 and early Web2 did so well).

That’s the goal, anyway. I don’t think the intent is nefarious, but I do think it’s realistic and grounded in capitalism. By leaning into the creators, Microsoft and other companies like them can (and will) win big.

There’s an old expression, “Where the attention goes, the energy flows.” And right now, all kinds of energy in the form of capital, from financial to human, is flowing in the Web3 direction. For example, Sunny Jain, President of the beauty and personal care line at Unilever, left after just three years to set up an investment fund in technology megatrends. And the now-former Global Managing Director of YouTube Gaming, Ryan Wyatt, resigned to become CEO in Polygon Studio.

“In my role at Polygon Studios, I will be focused on growing the developer ecosystem through investment, marketing, and developer support and bridging the gap between Web2 and Web3.”

All of those things in Wyatt’s new job description have one thing in common: getting and retaining core audience members’ attention.

And where do you go to capture people’s attention, and relatedly, hearts, minds, and wallets? Headfirst into the ecosystem — not by taking it over, but by seeding it with tools and support. What companies like Microsoft and leaders like Jain or Wyatt are doing is focusing on hacking the attention graph. Where is there endless growth? And how can you get a piece of the action?

Easy: be the toolmaker.

Put the tools necessary into the hands of the creators, and they will put their energy, focus, and attention into creating. And the audiences will come to participate, support, and invest. No need to be the center of attention — let the creators lead, the communities grow, and the ecosystems develop. These things can and will come and go. But the tools are always necessary.

That’s what Steve Jobs did when he put an iPhone in people’s hands that came loaded with a video camera and editing software. (You know I had to put an Apple reference in a Microsoft article ). The old way that limited creative expression snuffed itself out. By democratizing the tools of creative expression, industries are disrupted, and possibilities for new revenue streams are unlocked.

In other words, the more you create inclusivity by putting power in the hands of the creator, the more that you shape the future of the Internet, the future of commerce — the future of everything. You monetize the lifetime value of your audience by monetizing their attention within the communities they engage in.

Bottom line: if you can capitalize on human behavior, you’ll never lose.

The Metrics of Immersion

If you’re trying to grok the amount Microsoft paid for Activision Blizzard and you’re still not sure the deal makes any sense, then you’re just looking at the dollars, and that’s the wrong metric.

If you’re thinking that all they did was buy a massive IP portfolio, you’re quantifying the deal incorrectly. With all due respect to a game like Minecraft, for example (which, of course, Microsoft bought back in 2014), we could probably build a knock-off right now.

What we can’t get easily is the millions of kids worldwide downloading the game and spending hours of their life there. And, of course, you need a cloud-based solution to support all those gamers, as Kiplinger pointed out:

“It gives Microsoft (MSFT) another way to leverage its behemoth of a cloud-based services business. And make no mistake: That scarcity value is key at a time when major cloud companies such as Amazon.com (AMZN), Google parent Alphabet (GOOGL) and Microsoft all have designs on the space.”

The metrics make sense. Not that it’s simple to quantify a whole new world, but then again, you don’t really have to. Just notice the flow and go to where you know you can be of service and your products and other offerings are needed. Microsoft knew the revenue of the gaming industry increased over 10x in a mere 15 years with revenue totaling $155 billion by 2020. Some people might think their move to acquire Activision Blizzard is a bold bet, but I’d argue it’s a calculated risk and an example of being great at the game of Monopoly when it comes to the evolution of Web3.

What do you think about Microsoft’s metaverse play? How does it apply to your business?

This article originally appeared in the UX Collective. A UX focused community of 434,000+ design professionals.