One of the great gifts of the Great Pause is that things slowed down for a short time. The pitching machine that fuels entrepreneurial companies ground to a temporary halt (mine included).

As business ramps back up, I’ve been able to view presentations with clear eyes and a reignited sense of wonder. I’m more curious than ever about the potent intersection between art and science, which makes pitches powerful and persuasive.

The first two presentations I’d seen in a while took two distinct tracks:

One was well-researched and data-driven, with a load of graphs and charts. I could appreciate how much sweat equity went into constructing the pitch, but it truthfully left me cold.

The other was more of a narrative, with evocative and emotional imagery, but no data to back it up. I’m sure it would give stakeholders the warm-fuzzies, but afterward, it was like eating a Twinkie. Not enough there, there.

Bottom line: Neither presentation was a deal-closer.

Inbound marketing innovator Hubspot talks about how the best presentations are two-thirds stories. But how do you know if you’re telling the right stories in the right way to the right people? Consider another fun Hubspot fact: 90% of all marketing-produced sales content goes unused.

To get from a pitch deck to a done deal, you need to craft a human-focused narrative that has some meat on its bones in the form of relatable data. Sprinkle a dash of unexpected delight, and voila! You’re telling a story that your audience — be it a potential client, investor, boss, or any other decision-maker — can buy into.

It all starts with knowing your audience and understanding their pain points, challenges, and goals. That means diving below the surface to explore the deeper levels of human motivation.

What I like to do is create an intersect map to see where the overlapping sweet spot is for key stakeholders. This means empathizing with each party and delving into more nuanced motivations. So, you have to consider:

Let’s say, for example, I’m pitching a distillery in the non-alcoholic spirits space that makes a delicious, low-calorie, plant-based whiskey alternative. Their stated goal is to drive double-digital DTC sales in the next year.

If we create a campaign that achieves that objective, then that goes beyond top-line revenue goals to a higher good: validation for a burgeoning market. Here’s what that can mean for each of the key players:

The intersect map can be represented by a Venn diagram that shows what’s good for the client, brand, and end-user looks like this: 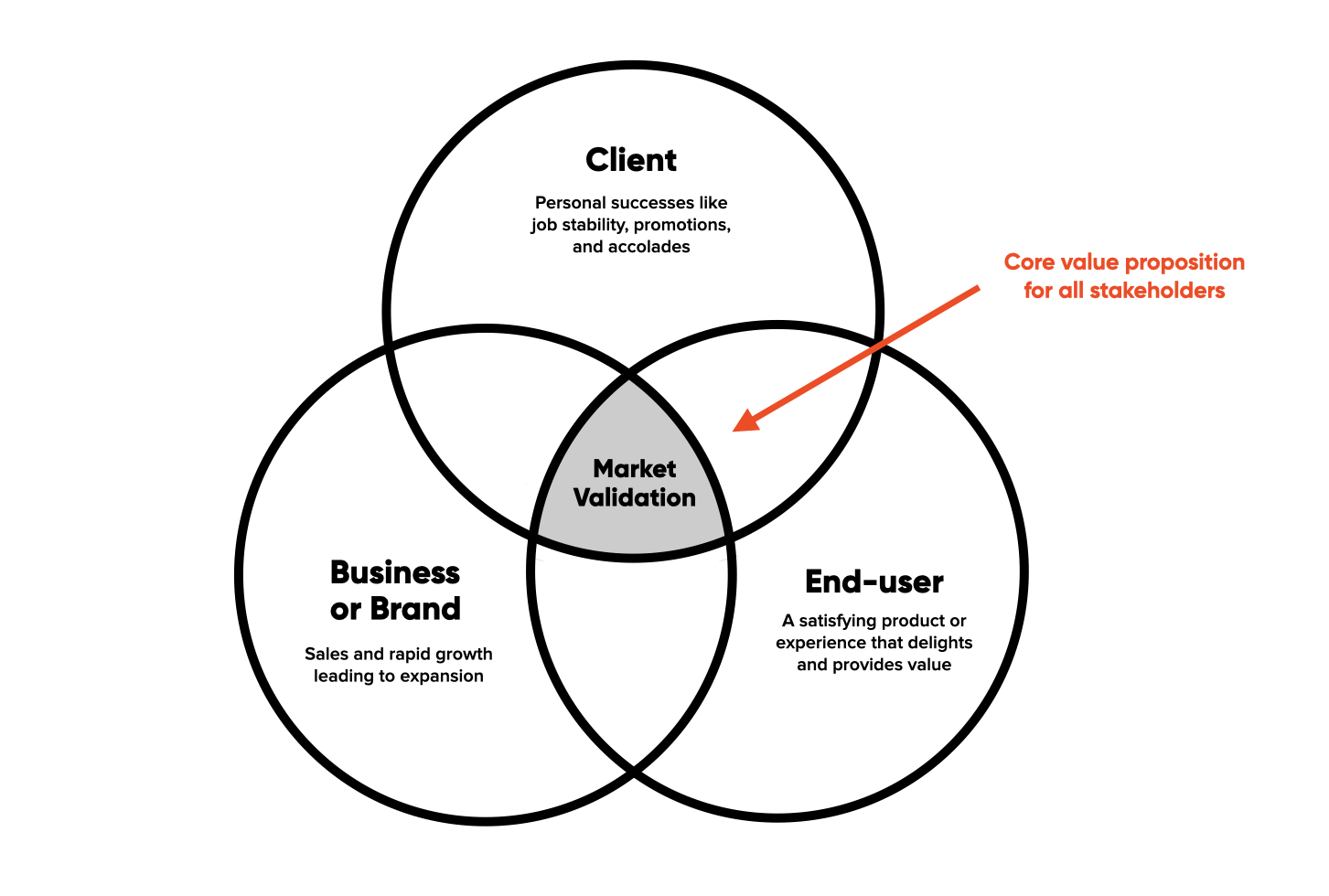 That intersection is critical because now we know how to structure the narrative and the data, so it keeps coming back to what they really want, not just what they’re asking for. It helps us weed out superfluous details and land on the common ground — the core value proposition — that speaks to all stakeholders.

Winning stories take the audience on a hero’s journey from the ordinary through extraordinary conflict and defeat to a triumphant, transformative finale. This is storytelling 101, as described by mythologist Joseph Campbell’s seminal work, The Hero With a Thousand Faces, where he explored the psychology behind this universal, time-tested arc. I mean, is there anything better than watching Tony Stark announce that he is Iron Man? Or ride along with Luke Skywalker as he single-handedly obliterates the Death Star?

I digress, but the point is that what makes for an excellent presentation that will lead to growth is understanding how to make data human. Once you’re clear on the core message that the audience needs to hear, the trick is to break it down into a simple metaphor that people can remember and connect with.

This doesn’t just refer to words, but also (and maybe especially) to data points. Let’s go back to the non-alcoholic spirits distiller. We could go on for slides and slides quantifying the premium alcohol-free beverage market, which is projected to eclipse $100 million in the next few years.

Instead, tell the story about Generation Z, the oldest of which are in their early 20s and less interested in alcohol than their predecessors. Now, make the story personal: if you’re pitching decision-makers in their 50s and 60s, then Gen Zs includes their children and grandchildren. They want their offspring to be happy, healthy, and safe — so show them something that resonates.

Paint the picture of a group of 10 people in their early 20s, hanging out during the day, hiking, doing yoga, and indulging in self-care. Now show them in a bar, and seven out of 10 are ordering non-alcoholic (NA) cocktails.

Doesn’t that beat a rote PowerPoint slide that has a bunch of bullets that nobody cares about? This is a way to visualize data that resonates by articulating a growing market through the lens of customers who are quite literally growing into the market. And they want something different.

The audience you’re presenting to knows and cares about those kids in the bar. Remember, those are their children or grandchildren. Now we’re telling a story that incorporates their world in a way that makes it real.

Listen to their language

Knowing the story to tell in a pitch has everything to do with listening. From what keeps your audience up at night to their goals for the future, hear them out before you craft your presentation. And listen carefully, because it’s also critical to notice how they articulate themselves.

Using the same words and phrases as your audience is a game-changer. So, for example, if I’m meeting with a group of VCs or CMOS, I’ll take notes when I’m chatting with them before I pitch anything. If there are videos to watch of them in action so I can observe their speech modalities, even better.

Consider the metaphors in their language. Are they visual people who say things like, “I see a future…”? Maybe they come from a more auditory-driven place and often say, “What this sounds like to me is…” or “what I’m hearing is…” Or perhaps they have a kinesthetic bent, talking about what success feels like to them.

When I’m putting together the pitch, I am careful to weave into the presentation the metaphors, descriptors, and visuals they naturally gravitate towards. This is not to manipulate in any way, but rather to address the audience from the comfort of common ground, speaking the language they relate to most.

Because so much of what people want is to be understood, meeting them where they are — not where you want them to go — is the most critical part of any human-centered presentation. Everything in the story should have a living, breathing element to it. This is where wonder comes in: your ability to spark unconscious emotions that link their hopes, dreams, and goals with your ability to deliver all they desire.

Connect the thoughts, and you’ve got a winning pitch.